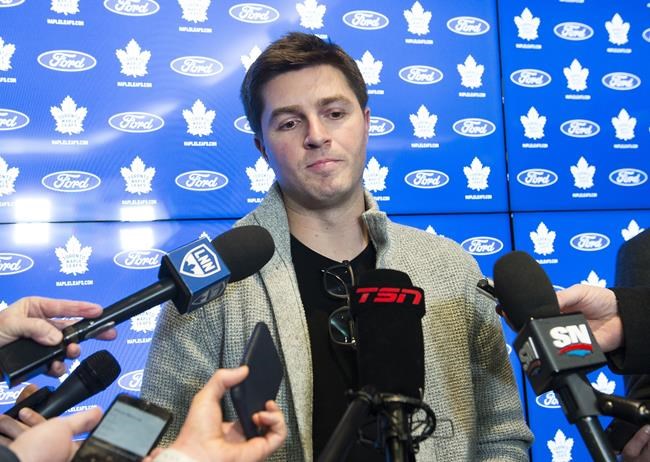 TORONTO — Kyle Dubas was watching television the evening of March 11 when news started to trickle out of Oklahoma City.

An NBA player — it would turn out to be Rudy Gobert of the Utah Jazz — had tested positive for COVID-19.

The NHL, and most of the rest of the sports world, would soon follow suit.

"Unlike anything that I've ever experienced professionally," Dubas, general manager of the Toronto Maple Leafs, recalled of a stunning night that soon flipped to the unknown of the following morning.

Hockey games were still scheduled, but everyone knew it was inevitable the NHL would also be forced to pause operations, which it did later in the day after cancelling all activities.

Looking back nearly three weeks later, Dubas, whose team was supposed to host the Nashville Predators in the midst of a heated playoff race, credits the NBA for sounding that alarm to the urgency of the novel coronavirus outbreak.

In short, it finally made the pandemic real for a lot people.

"I know it's only sports, and sports has rightfully taken a back seat, but it seemed like the decision by the NBA really was a momentous move in this entire thing — that's from my perspective as a biased sports person," Dubas said Tuesday on a conference call with reporters. "The decision rapidly right after the diagnosis of Rudy Gobert set in motion a real chain reaction not only in sports, but in society.

"It was all very surreal and you're trying to gather information as quickly as possible. The (Leafs) players are reaching out rapidly trying to figure out what's going on. It was unlike anything I had any experience dealing with."

Like millions of other people across North America and around the world, Dubas has basically been at home ever since. Time with his wife and their young son has been precious. There's the usual TV binge-watching and settling into a good book.

Dubas confirmed the Leafs' interest Tuesday in skilled 25-year-old winger Alexander Barabanov, who's spent his entire career with St. Petersburg in the Russian-based Kontinental Hockey League. He also praised the 55-goal junior season of 2019 draft pick Nick Robertson, adding the forward has a shot to make the team whenever its next training camp takes place.

But there's also been moments of reflection on a world that's changed drastically and in short order with a widening and unprecedented health crisis that's already resulted in thousands of deaths, social distancing, self-isolation and a crumbling economy.

"This is obviously a situation that a lot of people — very smart people — had warned about for a long time," Dubas said. "When those warnings come, it's easy to say, 'Well, we'll be able to control it when it happens.' Now we're in this situation, and you look back and you see all the people that reference these retrospective pieces or warnings from very, very intelligent people in the medical community that warned about this type of thing happening.

"For me personally, it just gives you some good perspective in terms of maybe rather than being caught up in the day-to-day of hockey or the small things that are going on in your life, it's better to spend more time listening to people who have objective expertise in these areas, whether it's medical or other issues that are coming for us."

In terms of hockey, Dubas and those in his job around the league face a mountain of unknowns.

He worries about members of Toronto's organization and their families. Some of the younger Leafs live by themselves far from where they grew up, which in some cases is an ocean away. Is everyone heeding the warnings of public health officials and the NHL?

"(We) try to communicate as often as we can with our players and staff and try to provide as much support as we can," Dubas said. "These are very different times and there's different players that are in different situations."

The second-year GM said no potential scenarios for resumption of play have been presented by the league, but he agreed the integrity of the Stanley Cup and the gruelling road that teams must travel to win it must remain if the NHL is able to come back in some form this spring or summer.

"That's always something that's been revered in hockey," Dubas said of the four-round tournament. "I have no idea what an abbreviated scenario would look like or how it will unfold ... these are unprecedented times with regards to everything that we're doing.

In both hockey and in life.

This report by The Canadian Press was first published March 31, 2020.