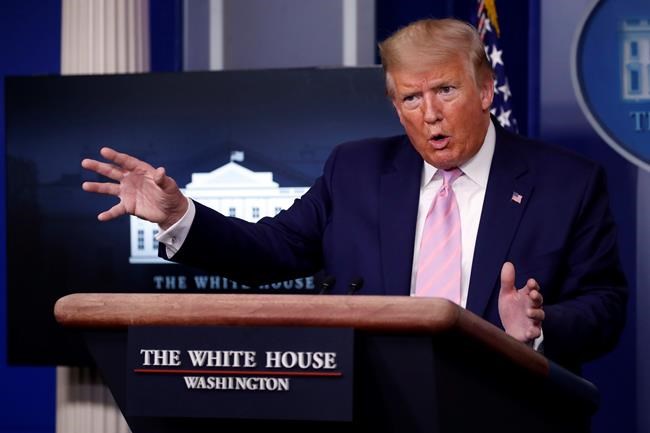 FORT LAUDERDALE, Fla. — U.S. President Donald Trump says there are plans to remove nearly 250 Canadians from two cruise ships and get them back to Canada.

The U.S. Coast Guard has directed all cruise ships to remain at sea where they may be sequestered "indefinitely" during the coronavirus pandemic, but Trump said Canada is coming to get the Canadians from the MS Zaandam and its sister ship the Rotterdam.

"We're taking the Canadians off and giving them to Canadian authorities. They're going to bring them back home," Trump said at his daily press briefing on Wednesday.

Trump said the same is true for citizens of the United Kingdom on the ships.

The president said states have been reluctant to take cruise guests, but he feels the U.S. is obligated to help. He said at a minimum, the U.S. will send medical teams on board.

"You have people that are sick on those ships and states don't want to take them," Trump said.

According to the U.S. Coast Guard, cruise ships must also be prepared to send any severely ill passengers to the countries where the vessels are registered.

The rules, which apply to any vessel carrying more than 50 people, were issued in a March 29 safety bulletin signed by Coast Guard Rear Admiral E.C. Jones, whose district includes Florida, Georgia, South Carolina and Puerto Rico.

But Trump said Tuesday he was going to speak with Florida Gov. Ron DeSantis about whether to allow the Zaandam and the Rotterdam, one of which has seen four people die and 200 passengers and crew report flu-like symptoms, to dock.

"We continue to engage with the passengers and Holland America to co-ordinate travel for Canadian citizens back to Canada upon disembarkation," Global Affairs said.

The Zaandam, which set sail in early March on a South American cruise, is carrying sick passengers and crew, while passengers not showing symptoms were transferred to the Rotterdam, which was sent to the region to help. Both ships have cleared the Panama Canal and are sailing toward Florida. Two of four deaths on the Zaandam have been blamed on COVID-19 and nine people have tested positive for the novel coronavirus, the company said.

Catherine McLeod, an Ottawa resident who was recently transferred to the Rotterdam from the Zaandam, said the captain came on the internal television system last night and "proposed a toast to world health and our safe return home."

Champagne and sweets were left outside each passenger's doors.

The Rotterdam captain "is a class act, so was the captain of the Zaandam," McLeod said in an email. "This guy has made some excellent speeches regarding his and the crew's devotion to getting us out of here healthy."

The ship was off the northwest coast of Cuba by late Wednesday morning. McLeod said passengers have been told they'll reach Florida by Thursday morning.

"We were told that Holland America would arrange for our transportation home, and received a call yesterday from guest services asking our destination," McLeod said.

They remain hopeful they won't be stranded at sea.

DeSantis said he expected a resolution Wednesday after speaking with Trump, but port authorities later said discussions between the company and officials over the terms of docking were ongoing and they did not expect to update Broward County commissioners on Wednesday as it was foreseen at the Tuesday meeting.

DeSantis maintained Florida's health care system is stretched too thin to take on the ships' coronavirus caseload, but he said he would accept the 49 Florida residents on board.

“My concern is simply that we have worked so hard to make sure we have adequate hospital beds,” he said.

Holland America said in a statement Wednesday night that it is awaiting confirmation to disembark guests from both ships in Fort Lauderdale, Fla. The company said both ships are scheduled to arrive at the boundary of U.S. waters early Thursday and will remain there while waiting for clearance.

The ships are on the Port Everglades docking schedule for Thursday afternoon at 1 and 1:30 p.m. ET.

Holland America also said guests fit to travel would transfer straight from ships to flights so they can return home. The approximately 45 guests who still have mild illness would continue to isolate on board. For the estimated less than 10 people needing critical care, Holland America says it has secured approval from a local health system partner that will accept them for treatment.

More than two dozen cruise ships are either lined up at Port Miami and Port Everglades or waiting offshore, the Miami Herald reported. Most have only crew aboard, but several still carry passengers and are steaming toward ports in southern Florida. Carnival notified the U.S. Securities and Exchange Commission on Tuesday that it has more than 6,000 passengers still at sea.

Under normal conditions, when a passenger or crew member become too ill for the ship's medical team to care for, they call the Coast Guard to provide a medical evacuation to an onshore hospital. Under the new rules, sick passengers would be sequestered indefinitely on board.

“This is necessary as shore-side medical facilities may reach full capacity and lose the ability to accept and effectively treat additional critically ill patients," the Coast Guard memo said.

The document requires all ships in U.S. waters to report their numbers of sick and dead on board each day or face civil penalties or criminal prosecution.

Cruise ships with sick passengers must consult with the Coast Guard, which may now recommend keeping the sick person on board. The Coast Guard will decide if a transfer is absolutely necessary, but the cruise line would be responsible for arranging on-shore transportation and hospital beds.

— With files from Liam Casey in Toronto and The Associated Press.

This report by The Canadian Press was first published April 1, 2020.