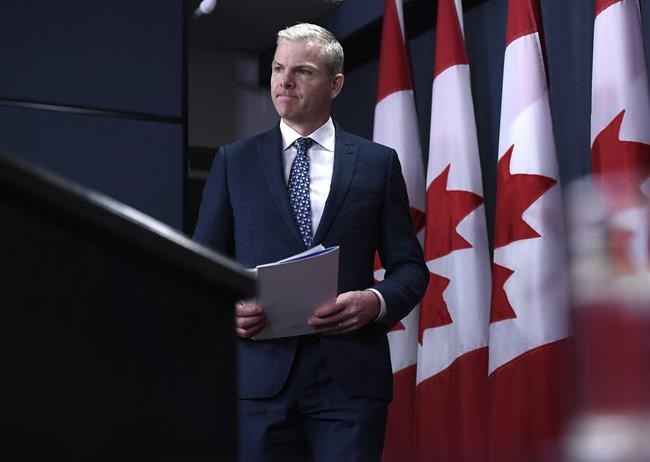 OTTAWA — Canada's oil and gas producers have asked the federal government to freeze the carbon tax and delay new climate change regulations while the industry weathers the storm of COVID-19.

The combination of plummeting demand and a production war between Saudi Arabia and Russia pushed prices down all over the world. In Western Canada, heavy crude prices fell below $5 a barrel again this week, less than a tenth of what it traded for a year ago.

The crisis has led to an all-hands-on-deck lobbying effort, with CAPP recording at least 29 meetings with federal officials and cabinet ministers between March 12 and March 29.

Moira Kelly, a spokesperson for Environment Minister Jonathan Wilkinson, replied to questions about the requests with a list of all the measures the federal government has taken to help businesses and Canadians in general, from a massive wage-subsidy program for employers whose revenues have plunged to a benefit program for unemployed workers.

"By providing immediate help to businesses, and to Canadians in need, we have put in place one of the most generous response plans in the world," she said by email.

"When recovery begins, Canada will recover stronger and more resilient by investing in a greener future. To that end, we will continue to move forward with our policy commitments. Just like science is guiding us in our response to COVID-19, it will continue to guide us in our fight against climate change."

Environment critics see the list of demands as the industry's attempt to use the COVID-19 crisis as cover to curb health and safety policies, and put off regulations that will help the environment.

He said many of the requests are about things CAPP has repeatedly lobbied against without success up to now, including the carbon price, clean-fuel standards, and restrictions on methane emissions from oil production.

In an interview with The Canadian Press, McMillan said the root of the requests come from the industry's need to maintain safe and essential operations as it follows health guidelines. That includes limiting employees on worksites and maintaining physical distancing for those who need to be there.

The industry also wants to ensure no new laws or regulations are implemented until proper consultations can be completed, and that the industry is given time to recover from this price shock. McMillan told O'Regan the fossil fuel sector wants to both survive the crisis and be part of Canada's economic recovery when it has been resolved.

"We encourage them to have a tools-down approach until we have a resolution of the crisis," he said Thursday.

Prime Minister Justin Trudeau addressed that in a news conference Friday, as he announced funding to clean up orphaned oil wells and a $750-million fund to cut emissions of methane, a major greenhouse gas.

"Just because we are in one crisis doesn't mean we can forget about the other crisis, the climate crisis, that we're facing as a world and as a country," he said.

Among CAPP's requests are delays to reporting requirements for greenhouse gas emissions, deferring the 2020 requirements for a number of reports on compliance with environmental and safety recommendations, and extending deadlines for on things like air and water pollution.

The industry also wants promised changes to the Canadian Environmental Protection Act to be put off because the needed consultations can't happen while public gatherings and travel are not allowed. The law, which governs toxic substances, has been under review since 2016 and the House of Commons environment committee recommended more than 80 changes to it in 2017. The Liberal government held off on implementing any of them until after the 2019 election.

Finally, CAPP wants the Liberal government to delay some major policies and regulations allow the industry to recover from the economic shock. That includes freezing the carbon price at $30 a tonne for the foreseeable future, putting off plans to implement a clean-fuel standard from 2022 to 2025, and doing nothing more to cut greenhouse gas emissions, including bringing in its promised legislation to set five-year, legally binding targets on its way to net-zero emissions by 2050.

Marshall said the industry is saying it isn't safe to send in people to do the required monitoring and testing to meet environmental standards, but is continuing to have hundreds of people on oilsands worksites. There was a COVID-19 outbreak at one of those sites this week.

Marshall said the industry says this is about health and safety but much of what it wants delayed or suspended puts human health at risk from more air or water pollution.

This report by The Canadian Press was first published April 17, 2020.