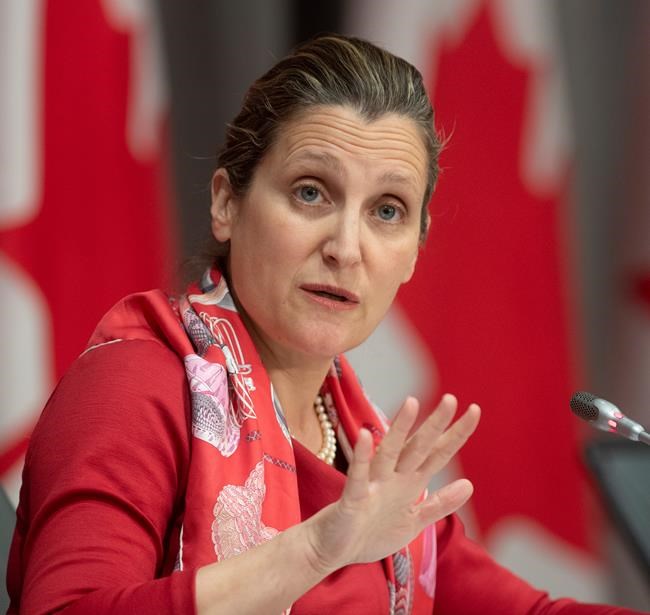 OTTAWA — The Canada-U.S. border has opened ever-so-slightly to asylum seekers under the new framework unveiled this week extending the historic shutdown of all but essential cross-border traffic.

Those who have been crossing irregularly into Canada are still being turned back but those who arrive at land border offices and meet certain criteria can now file refugee claims.

The move effectively restores provisions of the Safe Third Country Agreement which had been set aside by Canada and the U.S. as they negotiated the unprecedented closure of the border as part of global efforts to limit the spread of COVID-19.

The agreement, known as the STCA, governs asylum claims at the border. It is rooted in the premise that those seeking asylum must request it in the first safe country in which they arrive. In the majority of cases, that has meant people can't lodge claims at official land border crossings since both Canada and the U.S. are considered safe.

The agreement has resulted in upwards of 54,000 people since 2017 entering Canada in between formal land border points to request asylum. Under international refugee conventions and treaties, they are allowed to make claims once they're inside the country.

The Liberals had been attempting to negotiate with the U.S. to close that loophole but it was the COVID-19 pandemic that has seen it sewn up, for now.

As part of the March agreement to close the border to all non-essential traffic for 30 days, the U.S. agreed Canada could turn back anyone trying to cross the border at unofficial points.

Prior to the shutdown on March 21, more than 3,000 people had entered Canada so far this year through unofficial crossings and were intercepted by the RCMP. Since the border closed, the RCMP say they've intercepted five.

The first round of border closure regulations, however, also prohibited any foreign national from entering Canada from the U.S. to claim asylum, exempting only unaccompanied minors, their parents, stateless people in the United States and U.S. citizens themselves.

The Canada Border Services Agency said one person has been let in under those exemptions.

The move to shut out nearly all asylum seekers made little sense from a public health perspective, said immigration law expert Sharry Aiken, who teaches at Queen's University.

"On the one hand, we say that if you're a temporary worker coming to pick tomatoes you are welcome to come and stay, as long as you quarantine," she said.

"At the same time, we are going to say no to any prospective refugee claimant?"

The move was also potentially offside with international conventions, critics argued at the time. They are cautiously welcoming the new approach.

"The government's decision to reopen land-border refugee claims brings its COVID policy more into alignment with our international law obligations as well as our own Charter of Rights and Freedoms," said immigration lawyer Chantal Desloges.

"However, I remain concerned about the legality of the continued prohibition for refugees who seek to claim other than at ports of entry."

In the order-in-council which lays out the terms for the next 30 days of the Canada-U.S. border closure, the government provides the ability for people to file claims at land points of entry if they meet the same criteria as that which exists in the STCA.

Though some of those had been covered in March regulations, a key one was restored in the current approach — the ability of people who have a relative in Canada to file for asylum.

For Martha Mason, the executive director at the Fort Erie Multicultural Centre, that means it is back to work.

Her centre, which sits right at a point of entry, has welcomed thousands of asylum seekers who qualified under the STCA in recent years.

The centre works in conjunction with CBSA to help claimants file the required paperwork and access services.

Before the border shut down in mid-March, they'd seen about 120 a month this year, nearly all people who already had a relative in Canada.

Now, Mason said she's focused on how to gear back up to assist new arrivals, from helping source protective gear to sorting out quarantine arrangements for newcomers who must isolate for 14 days.

This report by The Canadian Press was first published April 22, 2020.