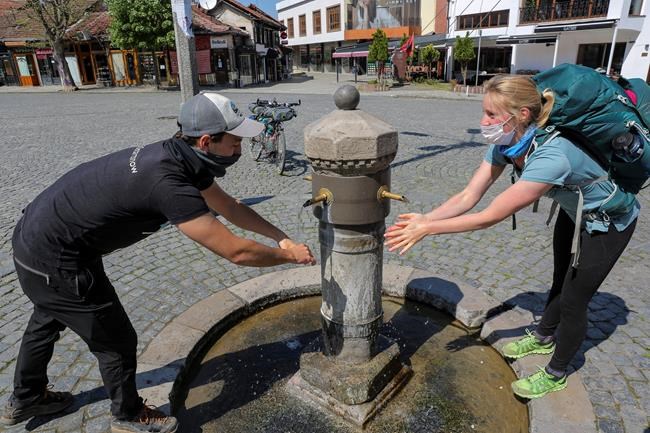 PRIZREN, Kosovo — British climate activists Rosie Watson and Mike Elm were on an international bicycle and running tour to promote their green campaign when they got stuck in Kosovo because of the coronavirus pandemic.

Watson, 25, from Loweswater in northwestern England, and Elm, 32, from Edinburgh, Scotland, have been stranded in Prizren, a town in Kosovo, 85 (50 miles) southwest of the capital, Pristina.

Since mid-March, Kosovo has been in a lockdown with all of its land and air border crossings shut. The virus has killed at least 22 people in the Balkan nation, which has more than 790 confirmed cases.

The couple decided against getting on an evacuation flight organized by the British government, saying they are against plane travel and they want to continue their journey once it's possible to do so. Their trip is low-budget and they have had free accommodation since the start.

They are enjoying the historic, cobblestone streets of Prizren, a town along the Bistrica River and the Sharri Mountains that was founded in the second century A.D. and has a medieval castle. They have also been sampling fli, a local butter pie, and been reassured by a traditional welcome from residents.

In Prizren, they have focused on writing about their trip. Watson has a blog as does Elm.

Watson started her “The New Story Run” in August last year from the United Kingdom, planning a two-year tour on foot to Mongolia “to tell stories of people finding a better and more equal and healthy way of living for us and the planets and tackling the climate crisis.” After running 3,570 (2,220 miles), or 17 (around 10 miles) per day, she has a lot to write about.

Inspired by her efforts, Elm joined her in November aiming to cycle a total of 12,000 (7,450 miles), or 50 (30 miles) a day. Before getting stuck, they took different routes, but they met up time and again along the way.

Elm met people in Prizren trying “to improve this beautiful city by bringing more trees and green space.” Previously, he was in Zlarin, which aims at becoming Croatia’s first single-use plastic free island. In Albania, Watson met with a community battling against hydroelectric operations that he says are endangering nearby Valbona National Park.

The pandemic will urge people to “see some of the benefits of having less cars in the city and the cleaner air, the nicer sound, the quieter environment,” he added.

When borders reopen, their plan is to continue their journey through Bulgaria, Georgia, Azerbaijan, Kazakhstan and finally Mongolia.

“This virus has shown that we, and governments, have the ability to transform society and whole countries very fast — something which we need to do to avoid the impacts of the climate crisis,” Watson said.

Llazar Semini contributed to this report from Tirana, Albania.