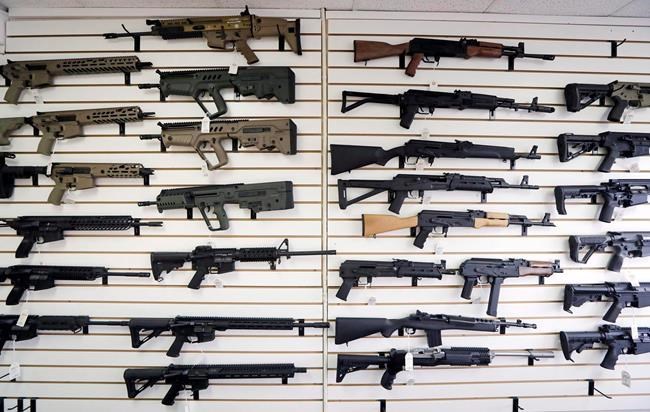 OTTAWA — The federal government has outlawed a wide range of rifles with the aim of making Canada safer, saying the guns were designed for the battlefield, not hunting or sport shooting.

The ban issued Friday covers some 1,500 models and variants of what the government considers assault-style firearms, meaning they cannot be legally used, sold or imported, starting immediately.

The list includes the popular AR-15 rifle and the Ruger Mini-14 used to kill 14 women at Montreal's Ecole Polytechnique in 1989.

"Today we are closing the market for military-grade assault weapons in Canada," Prime Minister Justin Trudeau told a news conference.

There is a two-year amnesty period while the government creates a program that will allow current owners to receive compensation for turning in the designated firearms or keep them through a grandfathering process yet to be worked out.

Under the amnesty, the newly prohibited firearms can only be transferred or transported within Canada for specific purposes. Owners must keep the guns securely stored until there is more information on the buyback program.

Trudeau cited numerous mass shootings, from Ecole Polytechnique to the killings in Nova Scotia last month, as the reasons for the move. Some guns have legitimate uses, including recreational shooting, he said, "but you don't need an AR-15 to bring down a deer."

A group that arose from the mass shooting on Danforth Avenue in Toronto's Greektown neighbourhood two years ago applauded the measures.

"This is about saving the next person," said Ken Price, whose daughter Samantha took a bullet to the hip and survived. "This terrible thing happened to us and we don't want other people to go through it. So let's do things that improve our odds.

Sport-shooting advocates have defended the use of semi-automatics like the AR-15 and question whether there is evidence to show the effectiveness of outlawing such firearms.

The Canadian Coalition for Firearm Rights said Friday the new measures would affect hundreds of thousands of Canadians "who have followed every rule and regulation asked of them, and committed no crime."

"These guns have no legitimate civilian purpose," he said. "I want to assure hunters and farmers and target shooters in this country that nothing that we are doing today or we'll do in the future is intended to interfere with this lawful, responsible and legal activity."

Conservative Leader Andrew Scheer accused the prime minister of using the COVID-19 pandemic and the immediate emotion of the horrific murders in Nova Scotia to push the Liberals' ideological agenda and make major gun policy changes.

"Taking firearms away from law-abiding citizens does nothing to stop dangerous criminals who obtain their guns illegally," Scheer said.

Peter MacKay, who is vying to replace the outgoing Scheer, tweeted that as a Nova Scotian he was outraged over Trudeau "using our tragedy to punish law-abiding firearms owners across Canada."

The new ban is comprehensive and the circulation and use of the listed firearms will be severely restricted during the two-year amnesty, said Heidi Rathjen, co-ordinator of the group PolySeSouvient, which includes students and graduates of Ecole Polytechnique.

In their election platform, the Liberals promised a buyback program for all legally purchased rifles that would fall under the coming ban, with owners offered fair market prices for their guns.

Rathjen expressed concern that allowing grandfathered weapons "would be a huge concession to the gun lobby."

"A non-mandatory buyback program could mean that it will take generations to get these weapons off our streets and out of our communities," she said. "Are we going to have to remind politicians that most of the authors of mass shootings in Canada were the legal owners of their assault weapons?"

Public Safety Canada said the government intends to implement the buyback program as soon as possible.

The Liberals reiterated promises to introduce other gun-control measures, including a plan to empower provinces and cities to manage the storage and use of handguns within their individual jurisdictions.

They also signalled intentions to overhaul the oft-criticized gun classification system and introduce stronger means of keeping guns out of the hands of people who should not have them.

The group Canadian Doctors for Protection from Guns welcomed the new measures but said it would continue to press the government for additional steps.

This report by The Canadian Press was first published May 1, 2020.

— With a file from Nicole Thompson