Ford: MLSE asked about Toronto being a hub city should NHL resume its season 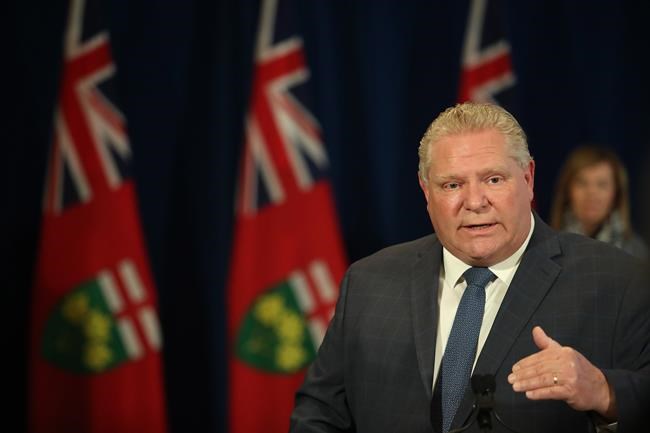 TORONTO — Ontario Premier Doug Ford says the Toronto Maple Leafs' parent company has been in contact with the province about the possibility of Canada's biggest city serving as a so-called "hockey pod" for teams should the NHL resume its season.

Speaking at his daily COVID-19 media briefing Tuesday, Ford said Maple Leaf Sports & Entertainment has reached out, but hasn't provided any details about a potential proposal.

"They've been in contact," Ford said. "They're coming up with a game plan, (the) NHL as a whole. They haven't really divulged anything else as of yet, but we have had a conversation.

"Once I get more information, I'll be able to pass it along."

The NHL, which was forced to pause its schedule March 12 amid the COVID-19 pandemic, has been looking at plans to centralize groups of teams in low-risk centres in hopes of resuming the 2019-20 campaign this summer.

Under one rumoured proposal, fans wouldn't be allowed in arenas and teams would be sequestered in hotels. There were 189 games left in the regular season when the NHL halted play.

Ontario's chief medical officer of health, Dr. David Williams, said he's interested to see what the NHL and other leagues eventually propose for a resumption of play.

"We'll see what they have in mind," he said. "We're open to hear some suggestions and ideas, but it's still early days. We'll wait to hear from them."

Toronto Mayor John Tory said he's also been involved in discussions about the NHL using Scotiabank Arena as one of its hubs.

"There have been some very preliminary, very high-level contacts with respect to the possibility of some hockey games being played here," he said. "But it's something that hasn't been finalized by the National Hockey League.

"Certainly, MLSE are very mindful of the fact there would have to be substantial public health considerations taken into account as to the possibility of those games being played here in Toronto."

An MLSE spokesman declined comment on the possible resumption of the season.

"We've been looking at how you can have this type of sporting event safely around the world," she said. "I absolutely think that these are the types of things that we need to think about.

"How we can do this safely during the summer?"

Apart from not allowing fans in arenas, Henry said players might look different on the ice.

"There's ways that players can take precautions to make sure that there's physical distancing," she said. "When we think of hockey, which I love, people are already wearing facemasks.

"So there's ways that players are protected when they're on the ice."

As of early April, eight NHLers were reported to have tested positive for COVID-19, including five members of the Ottawa Senators. All have since recovered.

The league and NHL Players' Association have formed a joint committee to determine a path forward that could get games back on the ice sometime in July.

The committee said last week in a statement they "have not made any decisions or set a timeline for possible return to play scenarios," but remained hopeful that players could return to their teams for "small group activities" later this month.

Bettman recently noted that government and medical officials will ultimately make the call on when sports can return.

-With files from Shawn Jeffords

This report by The Canadian Press was first published May 5, 2020.