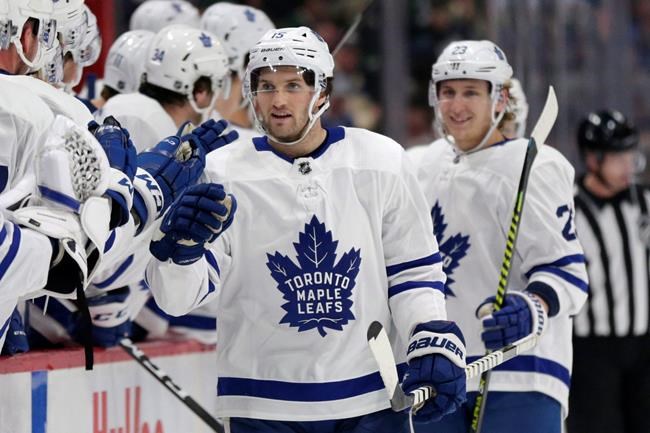 TORONTO — Alexander Kerfoot has been waiting out the COVID-19 pandemic like most NHL players.

There's been board games with family, backyard competition, workouts, Netflix, some reading and plenty of down time.

The Toronto Maple Leafs forward, however, has one distinct advantage during this unprecedented period of self-isolation and physical distancing — access to a private indoor rink.

Kerfoot, whose father is majority owner of Major League Soccer's Vancouver Whitecaps, has been able to skate at the regulation arena attached to the family's home in Whistler, B.C.

"I've been up there in isolation with my siblings a couple times," the 25-year-old said on a conference call Thursday without going into any further detail.

A number of players in Sweden have also been on the ice thanks to the rules surrounding that country's response to the novel coronavirus outbreak. Kerfoot, to a certain extent, is in the same boat, but said if the NHL gets the go-ahead to resume activities in the coming weeks or months, there will be plenty of runway to get back up to speed.

"Everyone right now is able to shoot pucks," he said. "When we come back we're not going to be jumping on the ice right away."

The crisis has also afforded Kerfoot a chance to reflect on a crazy stretch in his still-young professional career. Twelve months ago, he was decompressing after the Colorado Avalanche were eliminated in the second round of the playoffs.

Then came the blockbuster Canada Day trade to Toronto that saw him packaged along with defenceman Tyson Barrie for centre Nazem Kadri and prospect Calle Rosen. The Leafs and Avalanche also swapped draft picks, with Colorado paying half of Barrie's US$5.5-million salary in 2019-20.

"It's the nature of this sport, this business where things can happen so quickly," Kerfoot said. "At the end of the season last year, I could never have imagined getting traded and being in Toronto, but now that I'm (a Leaf) and we're in this situation, I couldn't imagine being back in Colorado.

"Whatever your current situation is becomes the new norm."

A restricted free agent last July, he immediately signed a four-year, $14-million contract with Toronto, but the transition to one of hockey's biggest markets was far from seamless.

Coming off 43- and 42-point campaigns with the Avalanche after four years at Harvard University, Kerfoot had registered nine goals and 19 assists in 65 games playing mostly on the third line when the NHL paused its season March 12.

He broke his jaw in November, and by the time he'd recovered, Sheldon Keefe had replaced Mike Babcock as head coach. Kerfoot then earned a two-game suspension for a dangerous cross-check on friend and former teammate Erik Johnson in his return to Colorado.

"I don't mean to make excuses by any means ... I think that there are a lot of different things that you get used to," he said when asked about his uneven play. "There wasn't one thing that you have to get acclimated with. So much happened this year. There were a lot of things thrown at you. I don't know if that stuff necessarily was the reason why I didn't play up to my personal expectations.

"Everything was a little bit inconsistent, probably from a team standpoint, from an individual standpoint. There were times when I was happy with my game, when I thought I was playing well."

Since heading home to Vancouver with the NHL on indefinite hiatus, Kerfoot has been taking part in the Leafs' daily online yoga sessions ("a good way to start off your day"), finished books on both Andre Agassi and Tiger Woods ("pretty insightful how those two guys got to be so good") and just wrapped up watching the third season of the Netflix series "Ozark."

He's been treating his training regime like an off-season, but has also kept a keen eye on anything that might point to an eventual return to play for the Leafs, who were in a playoff spot at the time of the pause.

"Everyone's paying attention to it," he said. "It's our job and we need to be ready whenever we need to come back."

And for Kerfoot, that will mean a return to a market he admitted last summer would be a massive change of pace after U.S. college hockey and the relatively small media contingent in Denver.

"Everything's amplified," he said of Toronto. "The highs are probably a lot higher than they are in other markets, and the lows are a lot lower. You've got to ride the waves. When you're winning a few games, it feels like you're the best team in the league. Then you lose one and everyone wants to trade everyone, fire everyone. It comes with how much people watch the team, how much people care.

"It makes it much more rewarding when you're doing well."

A feeling Kerfoot hopes to experience a lot more whenever the games return.