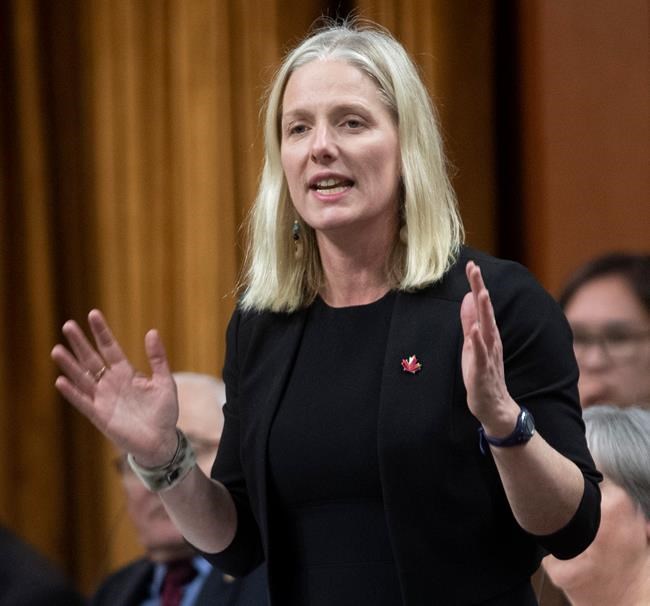 OTTAWA — The federal government is preparing to spend more than $3 billion in infrastructure money on projects to make facilities more pandemic-resistant and encourage outdoor activities in the age of COVID-19, Infrastructure Minister Catherine McKenna says.

McKenna told The Canadian Press in an interview Tuesday that while many of her cabinet colleagues have spent the last two months responding to the immediate crisis, her department has been doubling its effort to review and approve infrastructure projects submitted by provinces and territories for federal funding.

Hundreds of applications have been greenlit in recent weeks, though the specific announcements have yet to be made. But she said that in conversations with provincial and territorial leaders since March, it became clear there were needs created by the pandemic that weren't being met under the existing programs.

"We have adapted our infrastructure program to the new reality of COVID," said McKenna.

It will include things like retrofitting health-care facilities and schools, particularly with a view to allowing for more physical distancing and making it easier to practise good hygiene like handwashing. Projects to help people find ways to get outside safely will also be a priority, such as new or better paths, bike lanes, and nature trails.

The government is setting aside up to 10 per cent of the $33.5-billion provincial and territorial component of the Investing in Canada program as a COVID-19 fund to focus on responding to the pandemic, with Ottawa paying a bigger share of the bill.

"That stream is really recognizing some real opportunities to support the health response but also the economic response so we get projects going in the next one to two years," said McKenna.

The Liberals have been criticized for being slow to get their massive infrastructure programs moving. Disagreements and tensions between many provincial governments and Ottawa kept some projects from going ahead. The parliamentary budget office has issued several reports outlining the sloth-like pace of project approvals and the complex nature of the arrangements.

In January, the opposition parties in the House of Commons joined forces to pass a motion asking for an official audit of the Investing in Canada program, which overall committed more than $180 billion across more than a decade to infrastructure programs.

About half the $33.5 billion coming through signed agreements with the provinces and territories has yet to be allocated, said McKenna.

Normally, Ottawa would cover one-third of the cost of municipal projects, and one-half of the cost of provincial projects. The COVID-19 program will bump Ottawa's share up to 80 per cent, leaving provinces to determine whether and how to split the remaining 20 per cent with municipal governments when relevant.

Ottawa will foot 100 per cent of the bill for projects in the territories, up from 75 per cent. Yukon, Northwest Territories and Nunavut are also getting an extra year to finish the work, allowing for the fact that getting supplies to the territories for building this summer will be difficult, said McKenna.

Provinces will have to get things done by the end of the 2021 construction season, though McKenna said extra effort is being put into getting many things started this summer.

McKenna said the government's previous goals for its infrastructure programs — namely public transit, green infrastructure and high-speed Internet access — remain. The adaptations will make it easier to achieve those goals and build things quicker to meet needs and create jobs.

But she insists it will not be as easy as approving everything that gets suggested, and while approval processes will be accelerated they won't be eliminated.

"We need to get the most value for our money, which is not just shovel-ready projects, but shovel-worthy projects," she said.

McKenna would not say what Canadians could expect in economic stimulus programs once the crisis response to COVID-19 winds down.

"We're trying to understand right now what is the scale and what are the needs," she said.

"This is not a new stimulus program but an attempt to be smarter and more efficient with existing programs."

This report by The Canadian Press was first published May 12, 2020.