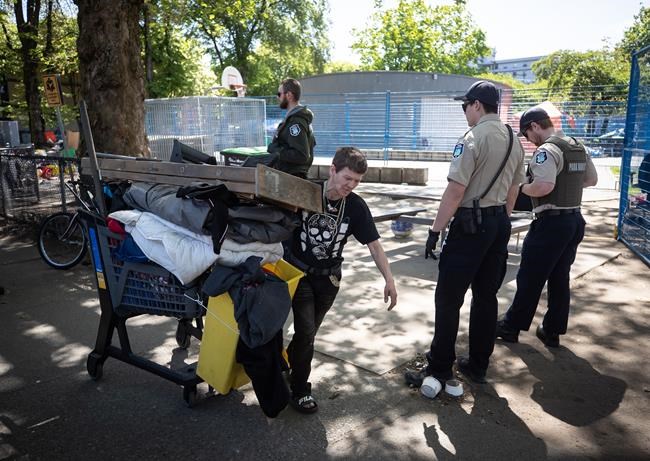 Henry said Tuesday she misses watching hockey games, but if the National Hockey League chooses Vancouver as one of its sites to reopen the season, players and team officials arriving from outside Canada must self-isolate for 14 days.

"I'm not going to compromise safety for any organization, whether it's the NHL or anything else, as much as I love hockey," she said at a news conference.

Premier John Horgan has said Vancouver would be available to act as a host site for NHL games if the league were to restart, but there has been no official announcement about the league resuming.

"There's a lot of ifs around this," said Henry.

The health officer was equally firm around not bending rules for international actors coming to B.C. for film shoots.

"Right now, I do not see lifting the restrictions on self-isolation," Henry said. "As things improve, both in the United States and in Canada, then we can look at having different conversations around the need for self-isolation."

She said there have been reports about cruise lines preparing to resume operations in the summer months, but B.C. ports will be off limits.

"If a cruise ship had somehow planned to come here then we would not be allowing people to come off the cruise ship," Henry said. "This is not the time for that type of a risk to be taken in our province. Certainly not in our ports."

Despite strict adherence to B.C.'s self-isolation rules for travellers and others arriving in the province, Henry had some advice for those wanting to get out and start new relationships after being cooped up for weeks.

She said people need to take things slowly and search for quality not quantity.

"If you are going to start a relationship with somebody this isn't the time to do rapid serial dating, OK," she said. "Pick somebody and see if it works and then take your time."

Henry said people who are sick should not be trying to meet others.

"Keep your germs to yourself," she said.

There has been one more death, a senior who was a resident of a long-term care home, she said. B.C. has now recorded 131 deaths.

Health Minister Adrian Dix said the province is undertaking a voluntary survey called "Your Story, Your Future" to help health officials track where the virus has been in B.C. and how people endured the pandemic.

The survey asks participants about illnesses since January, travels and if they worked in the health care, grocery, transit, or law enforcement areas. It also asks respondents if they are interested in getting a blood test to help find out about coronavirus immunity.

Earlier Tuesday, the government said vulnerable and homeless people could soon receive a smartphone to access support services and to stay connected with friends and family while practising physical distancing.

Social Development and Poverty Reduction Minister Shane Simpson said providing up to 3,500 smartphones for vulnerable people will give them easier access to services and helps them connect to others when public spaces are closed because of the COVID-19 pandemic.

Lorraine Copas, executive director of the Social Planning and Research Council of B.C., said access to basic communication plays a central role in how people practise physical distancing that is required during the pandemic.

She said the phones can connect to Wi-Fi and include a pre-loaded $10 data card, giving people access to Internet.

About 1,000 smartphones have already been distributed, with 200 provided to people moved to hotels from homeless encampments in Victoria and at Oppenheimer Park in Vancouver.

"This is something that was really needed," said Copas in an interview. "People are shocked they can have access to this technology. It's really quite beautiful."

This report by The Canadian Press was first published May 12, 2020.