Next Conservative leader will inherit party on a solid footing: Scheer 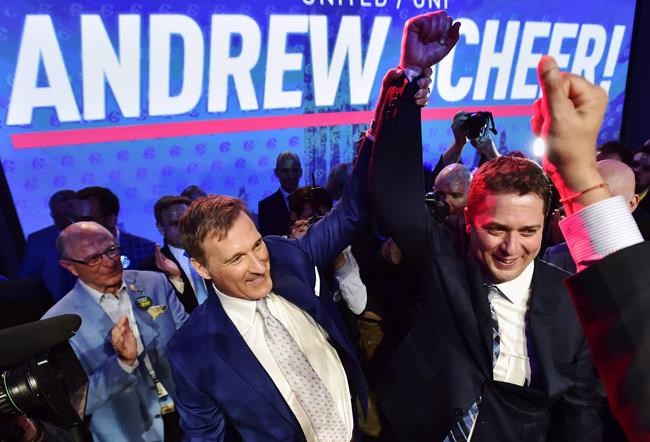 OTTAWA — Outgoing Conservative Leader Andrew Scheer says whomever replaces him will inherit a party in a strong position.

Scheer's time at the top of the Tories is coming slowly to an end, with his party's leadership race hitting a milestone Friday: anyone planning to cast a ballot for the Conservatives' new leader has to be a registered party member by midnight.

The vote itself will take place over the summer by mail, with all ballots required to be returned by Aug. 21.

Scheer said it has been a privilege to serve as leader of the party and he continues to lay the groundwork for the next one.

"The next leader is going to inherit a well-functioning party, a strengthened Opposition and a team that is ready to go and put a plan before Canadians to earn their trust in the next election," he said.

By the dollars, MacKay and O'Toole are out in front. MacKay brought in just over $1 million in the first three months of 2020, while O'Toole had about around $784,000, though from more donors that his primary rival.

Lewis and Sloan are running a different kind of neck-and-neck race, having nearly evenly matched each other in the first round of fundraising, bringing in $447,000 and $410,000 respectively from nearly the same amount of donors.

There is a wildcard, though.

Longtime Ontario Progressive Conservative activist Jim Karahalios was in court Friday trying to argue that his disqualification from the race ought to be overturned.

He raised around $294,000 in the first three months of the year, a sign of his appeal among some of the party's rank and file. He is well known as an aggressive campaigner who often seizes on a theme of political party's leadership being out of touch with the grassroots.

A few weeks before the cutoff for candidates to register in the contest, his campaign sent around an email accusing O'Toole's campaign chair of promoting the implementation of Islamic religious law, known as Shariah, in Canada.

Walied Soliman, a prominent Toronto lawyer, has worked on the legalities of finance arrangements that satisfy Islamic restrictions on charging interest.

Accusing someone of supporting Shariah law is often taken to be an anti-Muslim slur. Complaints against Karahalios were subsequently filed with the party, starting a process that led to his dismissal from the race.

He is challenging that on the grounds that he broke none of the actual rules of the contest.

It is unclear when a decision in the case will come.

This report by The Canadian Press was first published May 15, 2020.