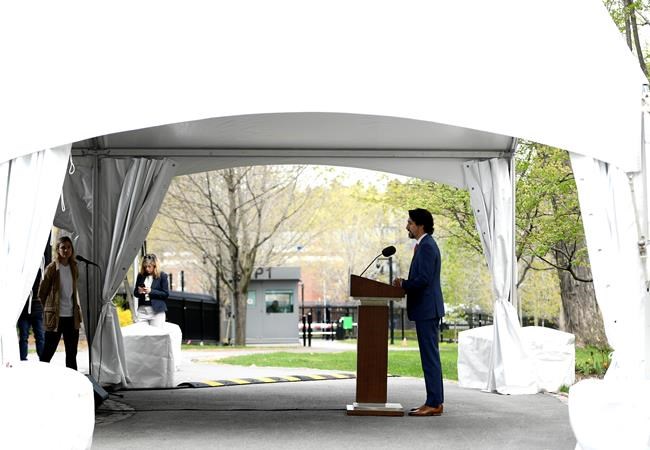 OTTAWA — Prime Minister Justin Trudeau defended Canada's bid for a seat on the United Nations Security Council Tuesday by linking the rebuilding of the world after COVID-19 to the aftermath of the Second World War.

The prime minister drew a direct link between the pandemic and the post-war reconstruction, when Canada played a role in founding the UN, the Bretton Woods global financial institutions and other multilateral organizations such as NATO.

Trudeau said on Tuesday the pandemic recovery makes Canada's bid for a seat on the council more relevant.

He drew the historical parallel to rebut criticism by a group of people who issued an open letter saying Canada is unfit to serve on the UN's most powerful body, citing what they said is a series of foreign-policy failures.

Environmentalist David Suzuki, American scholar Noam Chomsky and Pink Floyd founder Roger Waters, among others, said Canada is not worthy of a council seat because of its positions on a variety of issues such as climate change, the Middle East and Venezuela.

Trudeau gave a sweeping justification for why he believes Canada deserves a temporary two-year seat on the council starting next year — a bid that has been characterized in some quarters as a waste of time, or a global vanity project.

"In the years following World War Two, we created a range of multilateral and multinational institutions like the IMF, the World Bank — the Bretton Woods institutions — that helped the world over the following decades develop tremendous prosperity and opportunity for people right around the world," he said.

Some 75 years later, he said the current crisis is on the "scale" of the Second World War. "I think there need to be real reflections on how we move forward as a world, how we update and adjust our various multilateral institutions to better respond to the world we're becoming part of, right now, in a post-COVID era."

Canada is well-positioned because it is managing its economy well during the pandemic while holding true to its values and principles, he said.

A readout from the prime minister's office late Tuesday said Trudeau spoke with the permanent representatives of the United Nations' Eastern European Group earlier in the day to discuss Canada's candidacy.

It noted Trudeau highlighted the deep ties between Canada and Eastern European Group, and that he highlighted Canada's contributions to the NATO missions in Latvia and Ukraine.

In the 1940s, Canada sent representatives to the major international meetings and conferences that gave rise to global institutions such as the UN. Canada lost its first campaign for the Security Council in 1946 but was successful the next six times, sitting on the council once a decade until 1999-2000.

Canada lost its 2010 bid for a seat, withdrawing after tiny Portugal — a country then wracked by the Great Recession — was able to win more support.

In June, Canada is competing against Norway and Ireland for two available seats on the council. Both countries are considered far stronger opponents than Portugal was a decade ago.

Trudeau tied the Security Council bid to his 2015 pronouncement that Canada was "back" on the world stage.

But the coalition of letter writers opposing the current bid, which includes organizations including Mining Watch, the Council of Canadians, and various pro-Palestinian groups, is far less enthusiastic.

It calls Canada a leading arms exporter, faults it for not supporting a treaty to abolish nuclear weapons and for backing mining companies responsible "for countless ecological and human rights abuses around the globe," and criticizes its support for Israel.

Trudeau shot back at the suggestion that Canada's policy towards Venezuela was off base.

Canada has played a leading role in the Lima Group of Western Hemisphere countries, which does not include the U.S., that has called for the ouster of President Nicolas Maduro, whom they say is a dictator that stole the 2018 election.

"For those that don't agree with our position on Venezuela, the dictator, Maduro, is illegitimate," said Trudeau. "He's creating a huge humanitarian crisis in Venezuela, which is now sending refugees throughout Latin America, and we are with our allies and friends in South America to find a solution to his awful crisis."

Canada and dozens of other countries, including the U.S. and European nations, recognize opposition legislator Juan Guaido as Venezuela's legitimate leader.

The United Nations estimates that six million Venezuelans will have fled their country by the end of 2020, as its economic, health and education systems continue to collapse.

This report by The Canadian Press was first published May 19, 2020.