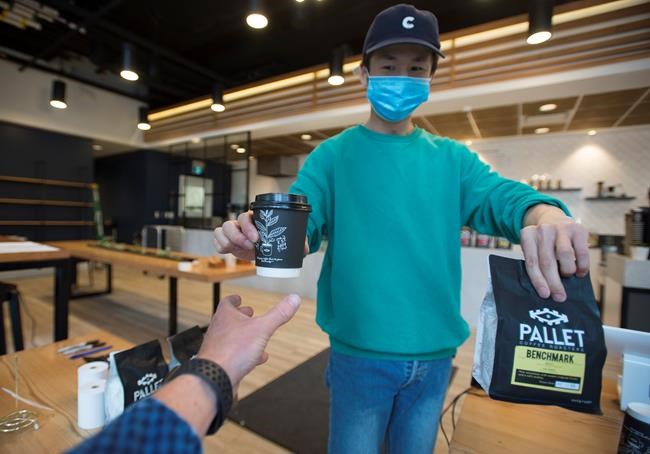 Provinces have been releasing plans for easing restrictions that were put in place to limit the spread of COVID-19.

Here is what some of the provinces have announced so far:

Newfoundland and Labrador lifted some of the public health restrictions imposed to slow the spread of COVID-19 on May 11.

The province has entered "alert level four" in its five-level reopening plan, allowing some businesses such as law firms and other professional services to reopen along with regulated child-care centres, with some restrictions.

Small gatherings for funerals, burials and weddings are also permitted with a limit of 10 people following physical distancing rules.

Municipal parks, golf courses and driving ranges can open and recreational hunting and fishing are permitted. Officials are reminding people that the new rules do not allow for parties or other social gatherings.

The province is loosening restrictions in a series of "alert levels" descending from five. The current alert level is to remain in place for at least 28 days.

At Level 3, private health clinics, such as optometrists and dentists, are to be permitted to open, as well as medium-risk businesses such as clothing stores and hair salons.

At Level 2, some small gatherings will be allowed, and businesses with performance spaces and gyms are to reopen.

Level 1 would represent "the new normal."

Nova Scotia Premier Stephen McNeil has announced there will be no return to school this year. He also says a decision on whether daycares will reopen will be made by June 8. Nova Scotia has eased some public health restrictions, however, directives around physical distancing and social gatherings remain in place.

Trails and provincial and municipal parks can now reopen along with garden centres, nurseries and similar businesses, but playground equipment is still off limits.

Public beaches also reopened along with outdoor activities like archery, horseback riding, golf, paddling, boating and tennis, with the proviso that social distancing and hygiene be maintained.

Sportfishing is permitted and people can attend boating, yacht or sailing clubs for the purpose of preparing boats for use. Drive-in religious services are now allowed, if people stay in their cars, park two metres apart and there are no interactions between people.

The government announced the loosening of some restrictions and introduced a "family bubble" policy, allowing two immediate family households to come together without physical distancing.

The province is following federal health guidelines and the chief medical officer of health has stressed that the number of new COVID-19 cases caused by community transmission must drop to few or no cases for at least two weeks — ideally 28 days — before an economic recovery plan is implemented.

P-E-I is accelerating its Renew PEI Together plan. Phase two of the plan will still begin May 22 as scheduled, but the third phase will now begin June 1 instead of June 12.

Phase three will allow gatherings of up to 15 people indoors and 20 people outdoors, organized recreational activities and the opening of child-care centres and in-room dining. Members of a household can currently gather indoors with up to five other people.

Other precautions, such as physical distancing remain in place.

Screening also continues at points of entry into the province and all people coming into P.E.I. are required to isolate for 14 days. Priority non-urgent surgeries and select health-service providers, including physiotherapists, optometrists and chiropractors, resumed on May 1.

The Renew P.E.I. Together plan also allows outdoor gatherings and non-contact outdoor recreational activities of no more than five individuals from different households.

New Brunswick's education minister said licensed daycares can begin reopening May 19. Children won't have to wear masks or maintain physical distancing, but they will be in small groups.

Anyone who has travelled outside of New Brunswick will not be allowed to visit early learning and child-care facilities for 14 days.

Meanwhile, the province has allowed more businesses and services to reopen.

Retail businesses, offices, restaurants, libraries, museums and seasonal campgrounds can do so under certain conditions. Those include having an operational plan that explains how they are meeting public health guidelines including physical distancing, hand hygiene and allowing staff to remain home when ill.

Outdoor gatherings of up to 10 people are also allowed if physical distancing is respected.

The resumption of elective surgeries is also part of the province's phase two of its reopening plan.

The third phase will allow regular church services, dentistry work and the reopening of fitness centres.

The final phase, which will probably come only after a vaccine is available, will include large gatherings.

Phase one, which started on April 24, allowed limited play on golf courses as well as fishing and hunting.

Post-secondary students were allowed to return if it was deemed safe by the school, and outdoor church services were again permitted, providing people remain in their vehicles and are two metres apart.

Quebec reopened retail stores outside Montreal on May 11.

Lottery terminals are also reopening after being shut down on March 20 with sales moving to online only.

Quebec's construction and manufacturing industries have resumed operations with limits on the number of employees who can work per shift. Elementary schools and daycares outside Montreal reopened on May 11, but high schools, junior colleges and universities will stay closed until September.

Elementary schools in the greater Montreal area will remain closed until late August.

Premier Francois Legault says public health conditions haven't been met in the area hardest hit by the coronavirus, so Montreal daycares will also remain closed until at least June 1.

Officials haven't made a firm decision about retail businesses, which are scheduled to reopen May 25.

Meanwhile, checkpoints set up to slow the spread of COVID-19 came down on May 18 in various parts of Quebec, including between Gatineau and Ottawa.

Ontario began its first stage of reopening May 19 including lifting restrictions on retail stores and surgeries.

The province says workplaces can begin to reopen but working from home should continue as much as possible.

All construction can resume, and limits will be lifted on maintenance, repair and property management services, such as cleaning, painting and pool maintenance.

Most retail stores that have a street entrance can reopen with physical distancing restrictions, such as limits on the number of customers in a store and providing curbside pickup and delivery.

Golf courses can reopen though clubhouses can only open for washrooms and take-out food. Marinas, boat clubs and public boat launches can also open, as can private parks and campgrounds for trailers and RVs whose owners have a full season contract, and businesses that board animals.

Other businesses and services included in the stage one reopening include regular veterinary appointments, pet grooming, pet sitting and pet training; libraries for pickup or deliveries; and housekeepers and babysitters.

Premier Doug Ford announced that Ontario schools will stay closed for the rest of the school year.

The Saskatchewan government's five-phase plan to reopen its economy started May 11 with dentists, optometrists and other health professionals allowed to resume services. Phase 1 also includes reopened golf courses and campgrounds.

Phase 2 will give the green light to retail businesses and salons.

Restaurants and gyms could open in Phase 3, but with limited capacity.

In Phase 5, the province would consider lifting restrictions on the size of public gatherings.

The Manitoba government has lifted its one-month limit on people's prescription drug supplies, allowing people to again get prescriptions filled or refilled for 90 days.

Its health offices, including dentists, chiropractors and physiotherapists can also reopen. Retail businesses can reopen at half occupancy providing they ensure physical spacing.

Museums and libraries can also reopen, but with occupancy limited to 50 per cent.

Playgrounds, golf courses and tennis courts reopened as well, along with parks and campgrounds.

Starting Friday, the province will allow groups of up to 25 people indoors and 50 people outdoors.

The province also plans to ease a ban on people visiting loved ones in personal care homes. By the end of next week, homes will be allowed to offer limited, outdoor visits with a maximum of two guests per resident.

Visitors will be screened on their arrival and will have to continue to practice physical distancing.

A second phase is to begin no earlier than June 1. That's when restaurants would be allowed to open indoor dining areas and non-contact children's sports would resume.

Mass gatherings such as concerts and major sporting events will not be considered before September. Meanwhile, Manitoba has extended a province-wide state of emergency until mid-June, to help prevent the spread of COVID-19.

Alberta has increased the limit for outdoor gatherings to 50 people - up from 15.

The province allowed stores, restaurants, daycares and hair salons to reopen across much of the province on May 14. But hair salons and restaurant dining rooms can't reopen in Calgary and Brooks until May 25.

Restaurants can only open at half capacity.

Premier Jason Kenney says if the first stage of reopening goes well, the next phase - which includes movie theatres and spas - could go ahead on June 19.

Alberta allowed some scheduled, non-urgent surgeries to start on May 11.

Service provided by dentists, physiotherapists and other medical professionals are also permitted. Golf courses reopened May 2, though pro shops and clubhouses remain shuttered.

The provincial government allowed a partial reopening of the B.C. economy starting May 19.

The reopening plans are contingent on organizations and businesses having plans that follow provincial guidelines to control the spread of COVID-19. Hotels, resorts and parks will follow in June.

Parents in B.C. will be given the choice of allowing their children to return to class on a part-time basis in June. The government says its goal is for the return of full-time classes in September, if it's safe.

Under the part-time plan, for kindergarten to Grade 5, most students will go to school half time, while grades 6 to 12 will go about one day a week. A mix of online and classroom post-secondary education is planned for September.

Conventions, large concerts, international tourism and professional sports with a live audience will not be allowed to resume until either a vaccine is widely available, community immunity has been reached, or effective treatment can be provided for the disease.

The Northwest Territories announced on May 12 a reopening plan that contains three phases, but the government didn't say when it would be implemented.

The plan includes more gatherings and the possible reopening of some schools and businesses. However, the territory's borders remain closed indefinitely to non-residents and non-essential workers.

There are several requirements that must be met before any measures are relaxed: there must be no evidence of community spread until today; travel entry points in the territory are strong and secure; risks are reduced from workers coming into the territory; and expanded community testing is available.

The territory's reopening plan outlines five phases including a period after a vaccine is available.

The plan's "restart" phase began May 15, with businesses that were ordered to close allowed to reopen as long as they submit an operational plan.

Two households of up to 10 people in total are also able to interact with each other as part of a "household bubble."

But bars and restaurants that offer dine-in services won't be allowed to reopen until the chief medical officer of health lifts restrictions.

The territory's borders also remain closed but residents are allowed to travel throughout Yukon more easily.

This report by The Canadian Press was first published May 21, 2020