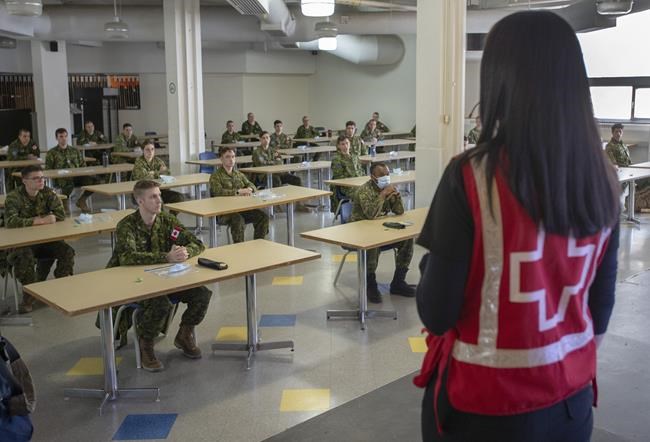 OTTAWA — The Canadian Armed Forces is reporting a dramatic increase in the number of military personnel who have contracted COVID-19 while working in long-term care facilities in Ontario and Quebec.

A total of 28 service members deployed in such facilities have tested positive for the respiratory illness, the military said in a statement Thursday. That compared with only five who had been found to have caught COVID-19 last week.

Military officials had previously indicated they were only to provide such updated numbers every two weeks. The Armed Forces now says it will publish a daily update, suggesting it expects more cases as service members continue to work in long-term care homes.

Sixteen of the positive cases reported Thursday were from service members deployed in long-term care homes in Quebec, the military said, while the other 12 were in Ontario.

Military personnel who get sick are immediately removed from long-term care facilities and given medical attention, said Defence Department spokesman Daniel Le Bouthillier. That can include isolation or being put into quarantine.

"Personnel will be rotated in as required in order to fill any gaps," Le Bouthillier added. "We remain flexible to be able to respond to a variety of tasks in support of civil authorities."

Nearly 1,700 members of the Forces are working in 30 long-term care homes where regular staff have been overwhelmed by COVID-19, providing medical assistance but also serving in support roles such as cleaning, serving food and assisting with residents' basic needs.

Twenty-five of those homes are in Quebec, which has been particularly hard hit by COVID-19 outbreaks, including one in the Montreal area where residents had been nearly abandoned by the staff. The other five facilities are in Ontario.

The Forces says all service members deployed to such facilities have been equipped with personal protective equipment and training in how to use it.

Prime Minister Justin Trudeau said last week that the risk of infection was something the military knew about going in.

"There are always risks in what they do and they go into that knowingly and willingly and that is why we offer them our deepest gratitude every day," he said on Friday.

"At the same time, we need to make sure that we are doing everything we can to protect them, so we will look at the protocols in place and see if and how they can be strengthened, as well as ensuring that cases of COVID-19 don't spread through the Canadian Armed Forces and others who are serving their country."

Trudeau has said the Forces are considering hazard pay for troops deployed in care homes, akin to what they would get on a dangerous assignment overseas.

This report by The Canadian Press was first published May 21, 2020.