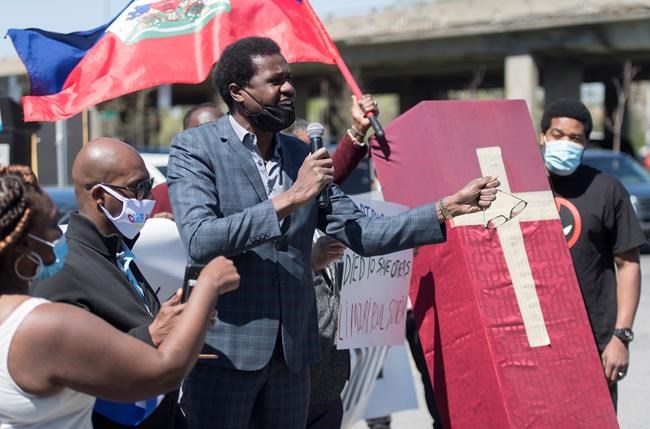 MONTREAL — A movement demanding special status for asylum-seeking "guardian angels" working on the COVID-19 front lines took their cause to Prime Minister Justin Trudeau's constituency office in Montreal on Saturday.

A noisy convoy of several dozen vehicles drove past the building housing Trudeau's Papineau riding office while others displayed banners in support of the movement, which wants the government to accelerate access to Canadian permanent residency for refugees who're risking their lives working in the health network since the start of the COVID-19 pandemic.

"In an extraordinary context, we can have extraordinary measures," said Wilner Cayo, the organizer of the protest. "One of these measures is to grant these people permanent residence."

Cayo said several hundred orderlies and other workers in the province's hard-hit long-term care homes find themselves in that very situation — waiting to obtain permanent residence.

"We are tired of empty words," Cayo said. "We want to send a message that Quebec is a more generous society than this and we say to our governments: stop your little political calculations, concretely recognize these people, grant them permanent residence."

Alexandre Boulerice, the NDP member of Parliament for Rosemont-La Petite-Patrie, was there to support demonstrators and said, in his opinion, the Liberal government will not be able to oppose the protesters' request for very long.

"The least you can do is be grateful for the work of these people and be able to speed up the process," Boulerice said. "They literally risk their lives in our CHSLDs (care homes) to take care of our seniors."

There is also disappointment with provincial politicians.

Earlier this month, Catherine Fournier, an independent member of the provincial legislature, tabled a motion to recognize the contribution of "hundreds of asylum seekers, mostly of Haitian origin" working as orderlies and called on the federal government to quickly regularize their status.

But the motion was rejected by the governing Coalition Avenir Quebec, with Premier Francois Legault said such an exceptional measure could encourage more asylum seekers to cross the border.

"I want to be clear, I'm very, very happy about the work that is done by some of them in our residences, we need them, we are lucky to have them," Legault said, adding that the federal government is responsible for handling those claims.

"But we cannot open the door to say, if you come — illegally — if you find a job, that's okay, I'll accept you as an immigrant, that's not the way it works," Legault said.

This report by The Canadian Press was first published May 23, 2020.