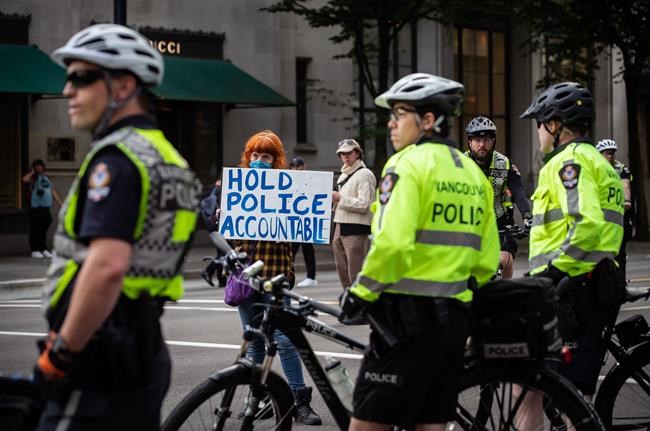 TORONTO — Casey Palmer's hands were already full keeping his family safe from the COVID-19 pandemic when the killing of George Floyd provoked a flurry of emotions he's still trying to unpack.

Like many Canadians, he was sheltering in place when TV and social media feeds were flooded with a video of Floyd, handcuffed and suffocating under the knee of a Minnesota police officer for nearly nine minutes.

The disturbing images of police brutality were familiar, but that didn't make them any less painful. He suspects the impact of weeks of isolation due to COVID-19 have coupled with anxieties he's harboured about living as a black man in Canada, and brought all of it to a "fever pitch."

"It's a recipe for a bit of a mental disaster," he said of dealing with another inescapable reminder of anti-black racism, this time in the midst of a global pandemic.

"We're already trying to figure out how to make our way through something the world hasn't seen in decades."

His two biracial sons, aged four and six, heard about the protests and the eldest started asking why people were marching in the streets. Palmer had to consider how to explain the situation in a truthful, but age-appropriate way.

"In doing that I have to go through my own emotional checks, and figure out what's going on inside of me so I'm not harming us both in the process," he said.

She's spoken to many black Canadians who have expressed feelings of despair, and for some, hopelessness, amid multiple reports of racially charged incidents that have emerged in recent weeks.

Normally, people would be able to meet with others and share their grief, but that's not possible these days.

"Because a lot of times when you're isolating you're also ruminating within a lot of negative, detrimental thinking, and not being able to address those psychological symptoms."

The death of Regis Korchinski-Paquet in the presence of Toronto police last week added another layer for many. The woman's fall from a high rise apartment building increased calls for reform to police and mental health support systems, and led to an investigation by an Ontario police watchdog.

People have taken to the streets, from Vancouver to Halifax, calling for justice in the young woman's death. They also marched for Floyd, and anti-black and anti-Indigenous racism.

Data from the United States shows black and Latino people are twice as likely to die from COVID-19, but similar figures are hard to come by in Canada because provinces and territories don't collect race-based figures.

If it wasn't for the virus, Sam Kemp-Jackson said she would have been among the thousands of people taking part in the Justice for Regis march last Saturday in downtown Toronto. Instead, she was housebound in an abundance of caution over lupus, an autoimmune disease that puts her at heightened risk to COVID-19 complications.

When she saw video of Floyd's killing, and another last week of a white woman who threatened to call police on a black man in New York's Central Park, she felt dread.

"These types of things get to you on an ongoing basis. When you keep hearing it, it's like death by 1,000 cuts," Kemp-Jackson said.

"It's tiring. It's exhausting... But there's no choice. You can't jump out of your skin, you can't decide: I just don't want to be black today, I don't want to deal with it."

Still, Kemp-Jackson, who hosts the "Parenting Then and Now" podcast, doesn't want to avoid the troubling videos, like the footage of Floyd's final moments.

"I feel like we're obliged to watch," she said.

"We have to know that this is going on because if we don't bear witness to the injustices ... then they'll just keep continuing."

Akwasi Owusu-Bempah, a professor of sociology at the University of Toronto, said he's resolved to check in with friends to see how they are coping. He said media conversations about anti-black racism often disappear after the news headlines fade, and it only perpetuates a cycle of trauma.

"There will be these catalyst moments, there's a lot of attention and then they blow over," he said.

Toni Morgan, who was raised in Toronto but now lives in Boston, isn't attending the local protests, but said she's staying on top of developments while maintaining physical distancing at home.

She noted many others have found ways to participate at a distance, including donating money to bail funds and supporting food pantries.

"The unique feature about this particular moment is that it's way more emotional than I think a lot of us anticipated," Morgan said.

"The responses I'm seeing from allies, and from people who are side-by-side now with black people in the struggle, are saying: 'We finally see what you're seeing.' For me, that's the moment that's breaking me, and that's the really emotional part of watching this all play out. Feeling validated, feeling frustrated, feeling a sense of urgency. It's all of these emotions jam-packed in a time where all of our engagement with people is through screens."

This report by The Canadian Press was first published June 4, 2020.