On WWI treaty’s centenary, Hungary says its ‘curse’ must go 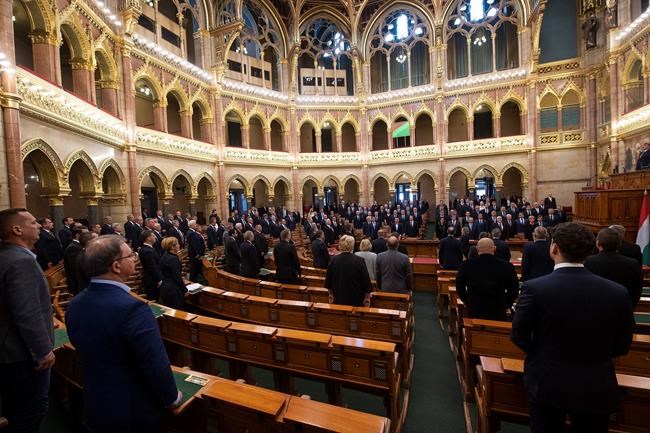 BUDAPEST, Hungary — Hungary's president on Thursday stressed the need for mutual respect between Hungary and countries where some 2 million ethnic Hungarians live following a post-World War I peace treaty signed exactly 100 years ago.

At the same time, Janos Ader spoke of Hungarians' “right” to keep unaltered their “spiritual borders,” despite the changes on the real map, and stressed the need to “rectify" the damage from the treaty.

Hungary was on the losing side in the war and was stripped of over two-thirds of its territory, populated by some 3.3 million ethnic Hungarians, after the June 4, 1920, Treaty of Trianon — signed in the Grand Trianon Palace in Versailles, France.

The fate of the ethnic Hungarian minorities in countries like Romania, Slovakia and Ukraine was a taboo issue during the roughly four decades of Hungary's communist regime that ended in 1990, when it regained attention. Since his return to power in 2010, right-wing Prime Minister Viktor Orban has prioritized support and advocacy for the roughly 2 million ethnic Hungarians in countries, and for the rest of the Hungarian diaspora around the world.

“No one can dispute our right to work, given that the nation’s geographical borders have changed, for the nation's spiritual borders to remain unchanged,” Ader said during a special parliamentary session.

In separate speeches, Ader and parliament speaker Laszlo Kover also talked about the 100-year-old grievances felt by Hungarians because of Trianon, especially the perceived anti-Hungarian bias during negotiations leading to the treaty and the disproportionately large number of Hungarians who suddenly found themselves as minorities in other countries.

Hungary, then a kingdom in the Austro-Hungarian Empire, was one of the Central Powers led by Germany which lost the 1914-1918 war to an alliance led by Britain and France, and joined later by the United States.

“We respect our but we ask them to also respect us and the Hungarians living in their countries,” Ader said. “We have to work for each other, not against each other."

“We have to rectify what the (WWI victors) damaged,” he added. “If we do so, the curse of Trianon will be removed from us.”

At the same time, Ader said Hungarians “will not be partners in suppression, in falsifying history, in the denial of Hungarians living outside the motherland."

Long-standing disputes about the Hungarian minorities’ rights,mostly regarding education and the use of their mother tongue, have flared up in recent years, especially with Romania, Slovakia and Ukraine.

Thanks to legal changes promoted by Orban's government, since 2011 some 1.1 million ethnic Hungarians, mostly living in countries, have received Hungarian citizenship, including the right to vote in Hungary's national elections.

In the 2018 parliamentary election, over 95% of the votes from countries were for Orban's Fidesz party.

In Budapest, public transport will halt for one minute Thursday afternoon to mark the Trianon anniversary.