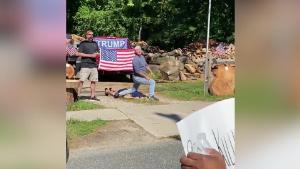 The moment was videotaped by several people from both sides of the protest and posted on social media. “Black lives matter to no one,” shouts one apparent All Lives Matter protester.
The entire incident lasted one minute and 23 seconds, according to video posted to social media that CNN has obtained.