Rest of Ontario enters Stage 2 on Friday except Toronto, Peel and Windsor-Essex 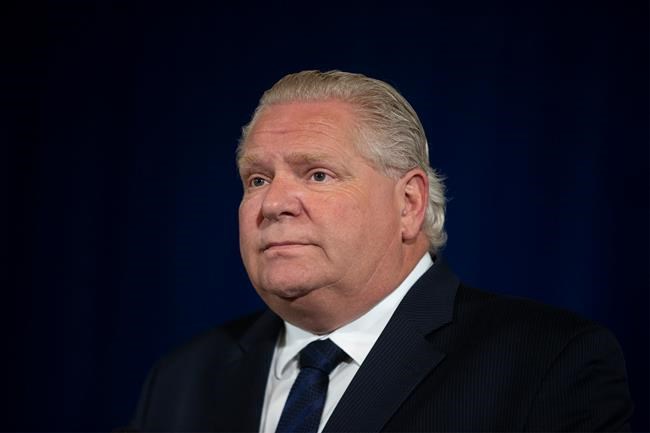 TORONTO — All regions of Ontario except for Toronto, Peel and Windsor-Essex will be in Stage 2 of the province's phased reopening plan as of Friday.

Most areas of the province were allowed to enter the second stage last Friday, except for the Greater Toronto and Hamilton Area, some regions that border the United States and those with COVID-19 outbreaks among migrant workers.

Premier Doug Ford announced Monday that the regions that can join them this Friday are Durham, Haldimand-Norfolk, Halton, Hamilton, Lambton, Niagara and York.

"For the regions still remaining in Stage 1 — Toronto, Peel and Windsor-Essex — we ask you, please be patient because we can't let our guard down," Ford said.

"But the good news is the public health trends across the province are going in the right direction."

The government is expected to provide another assessment of those regions' progress next Monday.

Toronto Mayor John Tory said he recognized that some residents may be impatient to move on to the next phase of the city's economic recovery, but the province's decision makes sense in light of the current data.

"We continue to focus on protecting health and saving lives and making sure that we don't have to lift restrictions only to have to rush to impose them again weeks later if the virus flares up again," he said. "I am confident that we are making progress and ... Stage 2 will come soon."

Ontario reported 181 new cases of COVID-19 on Monday, with the majority in Toronto and Peel Region.

Toronto added 85 new cases, Peel added 41, and all other regions reported fewer than 10 each, including many with no new cases.

Windsor-Essex reported seven new cases Monday and 26 the day before. Health Minister Christine Elliott said the region is "very close" to being able to open up, but noted that a number of people in the community, including health professionals, cross the United States border for work.

Ontario completed 21,751 tests in the previous day, with Health Minister Christine Elliott noting that the falling number of new cases coincides with increased rates of testing, keeping the positivity rate at "all-time lows."

The number of long-term care homes with active COVID-19 outbreaks rose by two since Sunday, to 69.

According to the Ministry of Long-Term Care, 32 homes that had previous outbreaks declared resolved have re-entered outbreak situations.

That includes Pinecrest Nursing Home in Bobcaygeon, Ont., where nearly half of the residents died due to COVID-19. The facility had been outbreak-free since mid-May.

Nearly 1,800 long-term care residents in Ontario have died amid outbreaks, according to data from the Ministry of Long-Term Care.

In London, Ont., the local health unit announced Monday that someone who attended a Black Lives Matter rally in the city on June 6 has tested positive for COVID-19. The person was wearing a mask, and was not symptomatic at the protest, nor have they developed any symptoms since, the Middlesex-London Health Unit said.

Meanwhile, the tourism and culture minister announced Monday that she will embark on a provincewide tour to promote local tourism. The province is investing $13 million to encourage Ontarians to explore their own backyards, Lisa MacLeod said.

"By focusing our support through local marketing campaigns and staycations, we'll be ready to welcome the world back to Ontario when it is safe to do so," she said.

MacLeod estimated the sector in Ontario has taken a $20-billion hit.

"The last thing you need then is to have someone deciding they're going to travel Ontario at a time when people are being urged to be thoughtful about where they're going," she said.

This report by The Canadian Press was first published June 15, 2020.