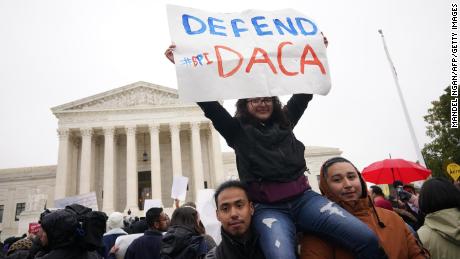 Immigration rights activists take part in a rally in front of the US Supreme Court in Washington, DC on November 12, 2019. - The US Supreme Court hears arguments on November 12, 2019 on the fate of the "Dreamers," an estimated 700,000 people brought to the country illegally as children but allowed to stay and work under a program created by former president Barack Obama.Known as Deferred Action for Childhood Arrivals or DACA, the program came under attack from President Donald Trump who wants it terminated, and expired last year after the Congress failed to come up with a replacement. (Photo by MANDEL NGAN / AFP) (Photo by MANDEL NGAN/AFP via Getty Images)

The Supreme Court on Thursday blocked the Trump administration’s attempt to end the Deferred Action for Childhood Arrivals, an Obama-era program that protects hundreds of thousands of immigrants brought to the US as children from deportation.