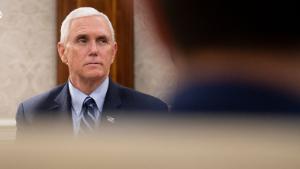 Vice President Mike Pence declined to say the words “Black lives matter” during an interview with an ABC affiliate in Pennsylvania on Friday, instead saying that “all lives matter.”

“Let me just say that what happened to George Floyd was a tragedy,” Pence told 6ABC Action News in Philadelphia when asked directly if he would say that Black lives matter. “And in this nation, especially on Juneteenth, we celebrate the fact that from the founding of this nation we’ve cherished the ideal that all, all of us are created equal, and endowed by our creator with certain inalienable rights. And so all lives matter in a very real sense.”