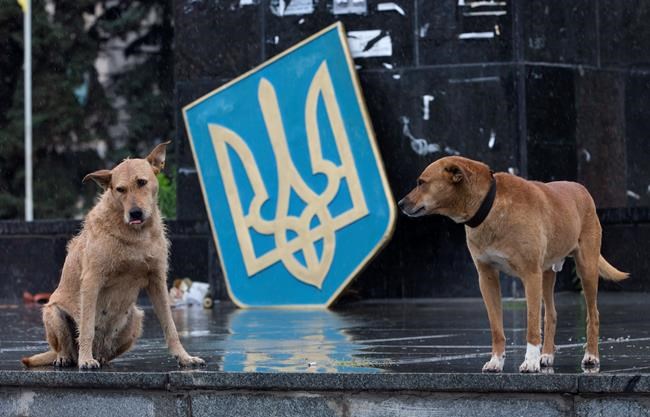 TORONTO — The Canadian Food Inspection Agency is investigating after dozens of dogs were found dead or sick on a flight from Ukraine at a Toronto airport.

Approximately 500 puppies landed at Pearson International Airport last Saturday, according to the agency. Thirty-eight were found dead on arrival, and many others were dehydrated, weak or vomiting.

"CFIA officials are currently investigating the circumstances surrounding this incident and will determine next steps once the investigation is complete," a spokesperson said in a statement.

In a Facebook post Friday, Ukraine International Airlines apologized for the "tragic loss of animal life" on one of its flights.

"UIA is working with local authorities to determine what happened and to make any changes necessary to prevent such a situation from occurring again."

The airline did not immediately respond to questions about the incident or its policies for transporting animals.

Rebecca Aldworth, executive director of the Canadian branch of Humane Society International, called on authorities to get to the bottom of how so many puppies were transported at such high temperatures, possibly in violation of industry animal safety standards.

"It raises a lot of questions. And I definitely think the Canadian public wants answers to these questions," said Aldworth.

"Responsible airlines will not transfer transport animals in extreme heat, because they know there is a risk of dehydration, heat exhaustion and even suffocation.

"And I would question what airline has the capacity to put 500 dogs on one plane."

Aldworth said the circumstances bear all the hallmarks of a puppy mill.

"My organization has been working for more than a decade to shut down puppy mills in Canada. And we are devasted to see that animals continue to be imported from equally horrific facilities in other parts of the world into this country," she said.

"People are looking for (pets) on the internet, they're buying sight unseen, and they're importing cruelty into this country when we have so much of it to deal with right here at home."

The CFIA spokesperson said the agency has rigorous standards for the importation of animals to Canada to prevent the spread of disease.

Penalties for failing to meet these requirements can include removal of the animal, fines or legal action, the spokesperson said.

Federal regulations also prohibit carriers from transporting animals in a way that would cause injury or undue suffering, the spokesperson added.

This report by The Canadian Press was first published June 20, 2020.