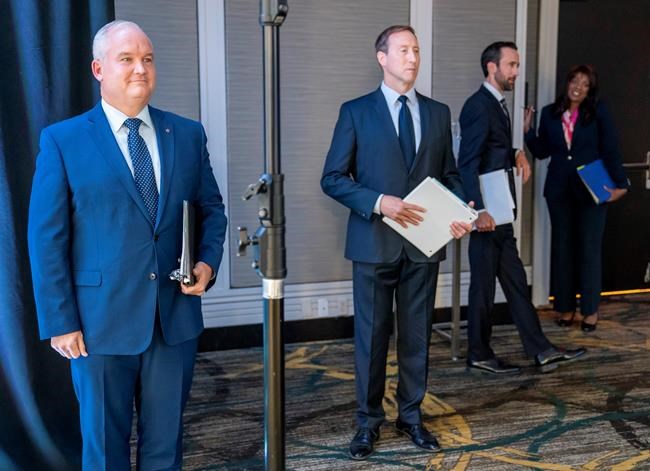 The complaint involves an alleged theft of confidential campaign and strategy data uncovered by an internal investigation after the O'Toole team's systems were reportedly hacked earlier this week.

No proof or documentation has been provided about this investigation or its findings, nor have any details been released about how this investigation was conducted, except that it included data collection and in-person interviews.

The O'Toole campaign alleges the MacKay team obtained confidential O'Toole login information for virtual campaign meetings held over the popular video conferencing application Zoom, and that at least some of them were downloaded.

MacKay's team is dismissing the allegations as a "desperate, last ditch strategy."

It issued a statement Saturday calling it "mildly amusing" to be on the receiving end of this accusation late on a Friday of what they believe was a "bad week for the O'Toole campaign."

"It is not surprising that this is a tactic being trotted out the same week that Erin O'Toole performed very poorly in the debates in front of party members and Canadians," the MacKay campaign said in their statement.

"Their campaign telegraphed immediately after the debates that they had given up on their unity message and were going to tear down their opponents as a desperate, last ditch strategy.”

The police agencies did not immediately respond for comment.

In a brief tweet, Lall said not a single word of the allegation is true.

Lall did not immediately respond to an interview request from The Canadian Press.

"We call on Peter MacKay and his team to immediately return and delete any stolen data or video's currently in possession of staff and volunteers," the O'Toole campaign said in a Friday release.

"We further insist on swift co-operation from Mr. MacKay and his campaign with the RCMP, OPP, and Toronto Police Service and the immediate termination of all involved in this potentially criminal action from their campaign."

The allegations come after MacKay, O'Toole and fellow candidates Leslyn Lewis and Derek Sloan squared off in two leadership debates this week.

The debates will likely be the final faceoff between all four candidates before the ballots are sent out to party members early next month.

The four candidates now have two months left to convince thousands of party members they are the best person for the job.

Ballots will go in the mail in July and must be back at the party's headquarters by Aug. 21. A winner will be announced shortly after.

This report by The Canadian Press was first published June 19, 2020.