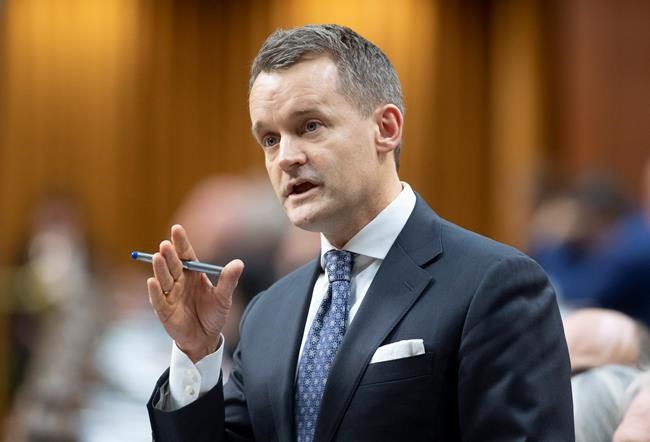 CALGARY — Natural Resources Minister Seamus O'Regan says achieving the Trudeau government's target of net-zero carbon emissions by 2050 is a "moon shot" — but it's not a case of randomly throwing out ideas.

During last fall's election campaign, the federal Liberals committed to the goal which means that any greenhouse gases still produced in Canada in 2050 would have to be offset with credits — but Ottawa has yet to give details on how that might be achieved.

In a wide-ranging online conversation with Peter Tertzakian and Jackie Forrest of Calgary's ARC Energy Research Institute, O'Regan compared the net zero ambition to former U.S. president John F. Kennedy's vow in May 1961 to put a man on the moon.

He added that specific goal gave the experts permission to find solutions and, in July 1969, Neil Armstrong became the first human to walk on the moon.

O'Regan says the Canadian government is looking at all potential solutions to reduce carbon emissions, including using carbon capture and storage and employing hydrogen, geothermal and small modular nuclear reactors as alternative sources of energy.

He defended Ottawa's record on providing aid to the oil and gas sector during the economic downturn caused by the COVID-19 pandemic, noting its wage subsidies and program to retire inactive oil and gas wells have been well subscribed, and suggesting companies are still evaluating its less popular loan programs.

"Net zero is a moon shot and a moon shot is not the same as just throwing ideas out there and seeing what sticks," O'Regan said.

"A moon shot is a very specific goal — Kennedy said we're going to get to the moon. And then afterwards the teams at NASA had to figure out how to do it.