Stage 2 in Toronto: ‘They’ve waited 3 months for a drink or a bite to eat on the patio’ 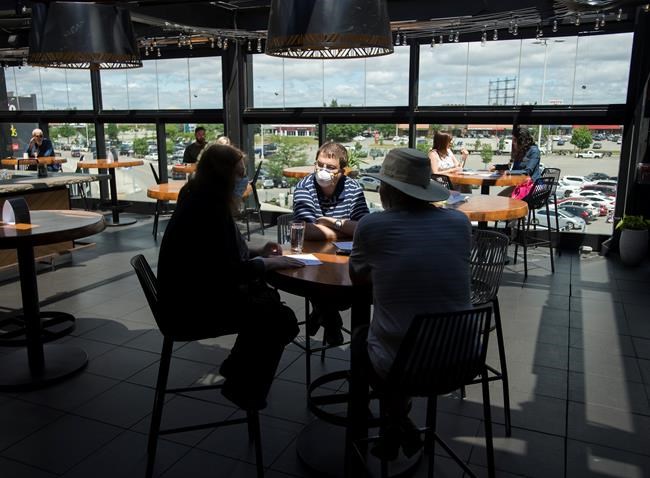 TORONTO — Patios and hair salons were back in business in Ontario's two most populous regions on Wednesday, as the premier announced that parts of the Windsor region will soon join them in Stage 2.

Toronto and Peel moved into the second stage of the province's reopening plan, with bar and restaurant patios, beauty salons, splash pads, mini golf and museums among the businesses allowed to resume operations.

In Toronto's Danforth neighbourhood, Jen Abbotts was among a handful of people having lunch on a streetside patio at the Factory Girl restaurant.

She said she hadn't planned on going out for a meal immediately when patio service resumed, but had an urge to order her favourite pasta dish.

"I've been craving it for four months, so I think it's time to get it," she said.

Still, she said, it felt strange to be at a restaurant for the first time since the pandemic began.

George Markakos, who owns the restaurant, said it's good to move beyond strictly takeout orders, but business is still severely limited, with only 26 of the usual 175 seats available.

"This is nowhere near enough to pay the bills, let alone make some money," Markakos said, adding the business is still depending largely on government subsidies.

Daimin Bodnar, co-owner of Hemingway's Restaurant and Bar in the Yorkville neighbourhood, said they opened the rooftop patio just after midnight for a few hours, and again at 11 a.m.

Though it's only operating at about 35 per cent capacity, the restaurant was "consistently full" Wednesday, Bodnar said, and should continue to be over the next several days based on reservations.

"The community and the public are very eager," he said.

"They're fresh-faced, they're smiling, they're happy with the precautions that we've taken and, you know, they've waited three months for a drink or a bite to eat on the patio."

Toronto Mayor John Tory stopped by the restaurant Wednesday to celebrate what he called "the start of patio season," posting photos of himself on Twitter talking to patrons while wearing a mask.

In a news conference Wednesday afternoon, Tory thanked front-line health-care workers for helping the city get to Stage 2.

"We are reopening because the vast majority of Toronto residents and businesses did the right thing," Tory said.

Meanwhile, Premier Doug Ford announced Wednesday that most of the region of Windsor-Essex will be allowed to move into Stage 2 on Thursday, after originally being held back due to COVID-19 outbreaks on farms in the region.

The only exceptions will be the communities of Leamington and Kingsville, which have seen 475 workers test positive on 27 farms. Two migrant workers have died in the region, as has one in Haldimand-Norfolk.

Ford said he has a plan to address the situation on farms, while also allowing COVID-19-positive but asymptomatic workers to continue on the job, with safety protocols in place.

"This is one of (farmers') busiest times of the year," Ford said. "They need the extra help and unlike other professions, most of it is outdoors and isolated."

Ontario's chief medical officer of health said testing of migrant workers found a cluster of asymptomatic positive cases. Dr. David Williams is recommending that such workers can continue working, separated from others who aren't infected, as well as sleeping away from their coworkers.

A group that advocates for the rights of migrant workers said it was "horrified and enraged" by the decision, which it said shows a complete disregard for the health and safety of workers.

"Ontario has responded to three farm worker deaths by signing a death warrant for more migrant workers," Syed Hussan, executive director of the Migrant Workers Alliance for Change, said in a statement.

"COVID-19 positive workers will be forced to keep working as they get sicker, keep infecting others, and more will die."

The province is also increasing inspections of farms this week, including the migrant workers' living conditions — in partnership with the federal government, as Labour Minister Monte McNaughton said the province doesn't have jurisdiction over the workers' bunkhouses.

Workers who have been here previously and have a social insurance number may also be eligible for the Canada Emergency Response Benefit, Ford said.

Ontario has hit roadblocks in trying to test migrant workers, with a temporary site shutting down after just a fraction of the region's 8,000 migrant workers were tested. The province then sent mobile testing units to farms, but Ford complained that farmers weren't co-operating and workers were fearful.

About 1,000 workers have been tested in the past two weeks, including 350 since the weekend.

Windsor's mayor, who had said the cases on farms in Essex County were holding back the entire region, said Ford's announcement is welcome news.

"There will be jubilation amongst the business community that there is a pathway forward for them to reopen," Drew Dilkens said.

A group which represents approximately 200 of Windsor-Essex' greenhouse growers said it will "embrace" the new provincial plan to address farm outbreaks.

It also promised further action to ensure all of the region is moved to Stage 2 soon.

"We understand the frustration felt by the communities of Kingsville and Leamington and we assure you that we are taking all steps to ensure we can move forward," the Ontario Greenhouse Vegetable Growers said in a statement.

"Mr. Ford refused to act early on and take control of COVID-19's ravaging of the migrant workers that were working on farms," she said.

"But of course only when things became completely chaotic and out of control is when the premier finally stepped up to do something."

The number of people in hospital with COVID-19 and those in intensive care and on ventilators all dropped, with the latter two figures falling to their lowest levels since the province started publicly reporting them at the beginning of April.

Ontario also extended its state of emergency today to July 15, which Ford has said is hopefully the last extension.

— with files from Salmaan Farooqui

This report from The Canadian Press was first published June 24, 2020.