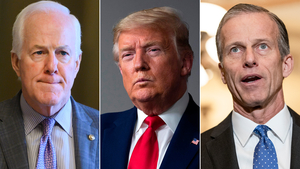 President Donald Trump is doubling down on a strategy he believes worked to his advantage four years ago: seizing on divisive culture wars and using race-baiting rhetoric as he seeks to fire up his base to give him a second term in office. His GOP allies on Capitol Hill are looking on with alarm.

Uncertain how to respond to a President who has long favored incendiary remarks and targets any Republican who shows even the slightest signs of disloyalty, many in his party are aghast as Trump’s poll numbers plummet and large numbers of Americans disapprove of his handling of the twin crises that have dominated this election year.