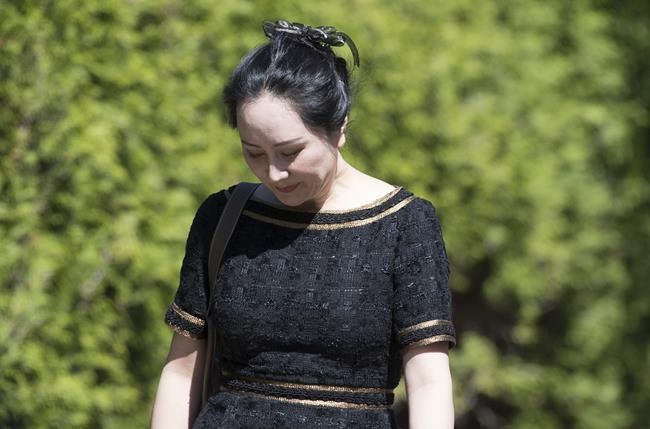 OTTAWA — The section of Canada's extradition law that the federal government is being urged to apply to drop the extradition case against Meng Wanzhou has rarely been used — and never for diplomatic or political reasons.

That was the advice given Prime Minister Justin Trudeau by his national security adviser shortly after the Huawei executive was arrested in Vancouver in December 2018 at the request of the United States.

Trudeau is now under mounting pressure, from Kovrig's family and 19 prominent former politicians, diplomats and jurists to terminate extradition proceedings against Meng in hopes that China will free the two Michaels. They point out that Section 23 (3) of the Extradition Act gives the federal justice minister the power to halt extradition proceedings at any time without having to give a reason.

But in a memorandum to Trudeau shortly after Meng's arrest, his national security adviser at the time, Greta Bossenmaier, pointed out that the section had rarely been used in the preceding 10 years.

The memo, obtained by The Canadian Press through access-to-information law, said Canada receives about 100 requests for extradition every year from foreign countries, about 60 per cent of which eventually result in extradition of the sought-after individuals.

Since 2008, Bossenmaier said only 12 cases — nine of them initiated by the U.S. — had been discharged or terminated by the justice minister. The grounds for dropping the cases varied but she added: "Note there are no examples of the minister discharging a case for political or diplomatic reasons."

The memo detailed the reasons for each of the 12 dropped cases, including severe health problems, the minor nature of the alleged offences, unreasonable delay in seeking extradition and, in one case involving Romania, a serious risk of persecution if the sought-after person was extradited to that country.

Two cases involving minors were also dropped as was another in which the requesting country failed to provide unspecified "assurances." Canada will not, for instance, extradite someone without assurances that they won't face a death penalty.

"The minister has broad discretion to decide but (that) discretion cannot be exercised arbitrarily," Bossenmaier concluded, emphasizing, "Again, there are no examples of the minister discharging a case for political or diplomatic reasons."

Bossenmaier also noted that Meng could appeal her case all the way to the Supreme Court of Canada and that "the process could take years."

It is the prospect of Kovrig and Spavor essentially being held hostage by China as long as Meng's case remains unresolved that prompted the 19 eminent Canadians — including former Supreme Court justice Louise Arbour, former Liberal justice minister Allan Rock, former NDP Leader Ed Broadbent and two former chiefs of staff to Conservative prime minister Brian Mulroney — to write Trudeau this week urging that the extradition proceedings against her be dropped.

Trudeau flatly rejected that appeal Thursday, arguing that giving China what it wants would encourage it and other countries to engage in hostage diplomacy, putting millions of Canadians abroad at risk.

He repeated himself Friday in a news conference: dissent and disagreement is a sign of a healthy society, he said, but he's not changing his mind.

"The government has been unequivocal on that," Trudeau said, and acknowledged that the lack of progress is frustrating for everyone, not least for Kovrig's and Spavor's families.

"A prisoner exchange would confirm for China's Communist rulers the value of kidnapping Canadian citizens. Once we capitulate, China — and other authoritarian regimes — would reasonably expect us to do so again," they wrote.

The group said Canada would be breaking faith with its allies, which have publicly condemned the arbitrary detention of the two Michaels, at Canada's behest. And it said releasing Meng would also "justifiably cause leaders in both the (U.S.) administration and in Congress to see us as a weak and untrustworthy ally at a time when we need all the goodwill we can muster in Washington.

"The damage to Canada-U.S. relations would be incalculable and would persist irrespective of the outcome of the presidential election in November."

Michael Kergin, one of two former ambassadors to Washington who signed the first letter to Trudeau, doubted that dire prediction.

Kergin was Canada's representative in Washington when former prime minister Jean Chretien refused to join or endorse then-president George W. Bush's invasion of Iraq. Many Canadians were concerned that Canada's economic interests would be damaged by the decision but Kergin said there was actually little impact on the relationship between the two countries.

"Aside from a few Americans who didn't want to buy Canadian maple syrup, there were no indications that the U.S. became tougher as a result of their displeasure," he said in an interview.

Kergin acknowledged that current President Donald Trump is more mercurial and more prone to retaliate against those who thwart him. But he doubted Meng is a high priority in the White House at the moment, with Trump facing a tough re-election fight in the fall and the U.S. mired in the COVID-19 pandemic.

"What sort of thing, beyond rhetoric, would he do?" Kergin said.

Kergin is also not convinced that a prisoner swap would encourage China or other hostile countries to use hostage diplomacy more often in future to get their way.

"I don't buy the argument completely. I don't rule it out entirely but I don't see it as being a major factor in this issue given the circumstances."

Kergin said Meng is almost like "royalty" in China, which saw her arrest as Canada essentially taking her hostage on behalf of the Americans and retaliated accordingly.

"I think this is a pretty special circumstance ... I would be surprised if something like this happened again," he said.

This report by The Canadian Press was first published June 26, 2020.