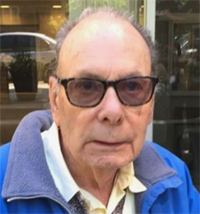 After a courageous battle with Alzheimer’s disease, Larry Stout has signed off and taken what he always referred to as the “eternal high jump”. Larry had a wonderful sense of humour; he was a terrific pal to his friends and one of Canada’s best broadcast journalists. Larry is predeceased by his parents Tom and Reta, and the love of his life Sheila Shotton. He is survived by his sister, Elaine, and children Michael (Toshiko), John (Melissa) and David (Judy) from his first marriage to Dennie, and grand-children Brittany, Sarah, Alex, Aidan and Abby and extended family.

Larry was born in Hamilton on September 11, 1939 and as he told everyone, his father took one look at him and ran off to join the army to battle the Nazis. Larry’s early years in Hamilton were modest; as he would say: his family “did not have a pot to piss in”.

Larry attended Assumption University (now the University of Windsor), graduating in 1960. He was a proud Windsor Alumnus who was awarded the Clark Award in recognition of his service. Beginning in 1960, Larry embarked on a career in journalism working first at CKOC in Hamilton. In 1961 he moved to Toronto working at CKEY, then he joined the Toronto Star. It was in broadcast journalism where Larry really made his mark, working in radio and television for both the CBC and CTV. Larry joined the CBC in 1964. In 1972 Larry received the Edward R. Murrow Award for best local documentary production in North America for the “Apartment Wars”.

While working at the CBC, Larry travelled the world to report on world events such as the war in Biafra, the 1973 Chilean coup, the “Troubles” in Ireland, civil wars in Nicaragua and El Salvador. Larry reported from the Middle East during the Yom Kippur War and the civil war in Lebanon. In 1976 Larry was evacuated from Beirut by the US Navy aboard the USS Spiegel Grove.

In 1980 Larry was nominated for an ACTRA Award as best host interviewer. Larry covered many Royal Tours, as well as the marriage of Prince Charles to Lady Diana Spencer. Larry covered politics in North America bringing election campaigns and results into Canadian living rooms. Larry was affectionately referred to as the “Mayor” due to his “predictably reasonable and middle of the road” reporting style.

Larry was a devout Roman Catholic and he was most proud of his being a host of the CBC’s coverage of the 1984 Pope John Paul II, Papal Tour of Canada. After a brief stint in public relations, Larry moved to CTV in 1989. He was Toronto Bureau Chief and a senior writer for the news anchored by his old pal Lloyd Robertson. At CTV, Larry appeared on air as an anchor and interviewer on CTV Radio, CTV News and CTV Newsnet where he hosted a daily business report from the Toronto Stock Market Place.
After his retirement in 2005, he devoted time to professional development of a new generation of broadcast journalists at CTV. Larry loved to tell jokes and spend time with all his pals at Jingles. He was an avid golfer who was a member of the Toronto Hunt Club and he cherished the golf trips he took with his sons.

The family wishes to thank all the staff at Cedarvale Terrace and Larry’s constant companion, amazing caregiver and pal, Jayson. Due to the COVID19 pandemic, a private family burial will occur, and alternative memorial arrangements will be made by the family to be held when conditions permit.

In remembrance, donations may be made to the Larry Stout Endowed African Diaspora Scholarship Fund at the University of Windsor.