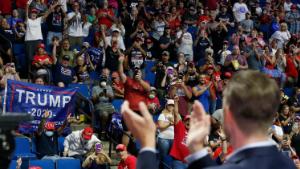 President Donald Trump’s campaign directed the removal of thousands of “Do Not Sit Here, Please!” stickers from seats in the Bank of Oklahoma Center in the hours before the President’s much anticipated Tulsa rally, the Washington Post reported on Saturday.

As part of the BOK Center’s safety plan for the June 20 rally, arena management had purchased 12,000 do-not-sit stickers with the intention of keeping people apart by leaving open seats between attendees, according to the Post.