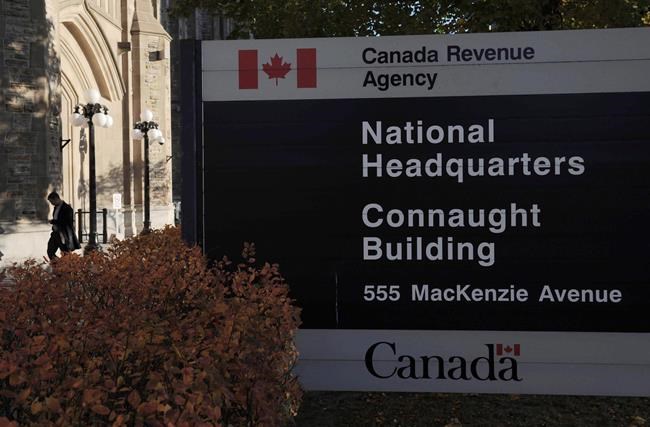 OTTAWA — The federal government has lost at least $439 million so far this year in productivity through a policy that allows civil servants to stay home, with pay, during emergencies such as the COVID-19 pandemic, the country's budget watchdog said in a report released Friday.

Most of that total was a result of employees at the Canada Revenue Agency staying home, unable to work, between March 15 and May 31, the Parliamentary Budget Office said.

That one department accounted for just over $311 million in paid leave, far ahead of the second-costliest department, Correctional Services Canada, at more than $33.8 million.

The report says the Canada Revenue Agency told the budget watchdog that limitations on work was the most common reason for taking leave, mostly related to compliance and collection activities being postponed during the pandemic.

The Public Service Alliance of Canada, which represents the majority of federal employees, called the numbers "modest."

The PBO report was compiled at the request of Edmonton Conservative MP Kelly McCauley, who wanted to know the financial impact of the policy, known as pay code 699.

The policy allows federal employees paid leave for emergencies such as being sick with COVID-19, having to quarantine, not being able to access the technology they need to complete their work and having to care for dependants.

It does not require employee to first use up other forms of paid leave, such as vacation, family emergencies or accumulated sick leave.

"The data shows that vast majority of public service employees were able to work at full capacity while only a third were occasionally forced to use 699 leave," said PSAC national president Chris Aylward.

The PBO also noted the leave amounted to about one per cent of government salaries for the period.

"The price of forcing layoffs and trying to rebuild the public service after the pandemic would have cost taxpayers tenfold — let alone the negative impact on our economy," Aylward said.

The PBO said 699 costs could be closer to $623 million, government wide, because the Treasury Board Secretariat, which is responsible for the civil service, only provided information from 62 of the 88 federal public service organizations, representing about 70 per cent of government departments.

The PBO noted that it was not able to find a leave policy of a similar scope in the private sector, although some provinces have offered their employees some pay cushions.

"Many provincial governments have issued notices requiring managers to provide flexibility and allow employees to draw on future sick leave credits during the pandemic," the PBO report said.

This report by The Canadian Press was first published July 24, 2020.