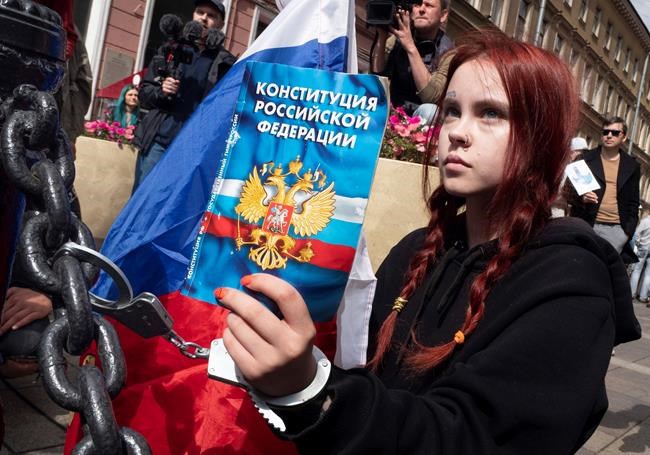 MOSCOW — Thousands of demonstrators rallied Saturday in the Russian Far East city of Khabarovsk to protest the arrest of the regional governor, continuing a three-week wave of opposition that has challenged the Kremlin.

Khabarovsk Krai Gov. Sergei Furgal has been in a Moscow jail since his July 9 arrest on charges of involvement in murders that occurred before his political career started. He has denied the charges.

Protesters in Khabarovsk see the charges against Furgal as unsubstantiated and are demanding that his trial take place in his home city, 6,100 (3,800 miles) east of the Russian capital.

His supporters have held daily protests, with the largest turnouts on weekends. The latest demonstration attracted about 10,000 people, according to some news reports. But police said the crowd was about 3,500.

Unlike in Moscow, where police usually move quickly to disperse unsanctioned opposition protests, authorities haven’t interfered with the unauthorized demonstrations in Khabarovsk, apparently expecting them to fizzle out.

Authorities suspect Furgal of involvement in the slayings of several businessmen in 2004 and 2005, when he was a businessman with interests focusing on timber and metals.

A lawmaker on the nationalist Liberal Democratic Party ticket, Furgal won the 2018 regional gubernatorial election even though he had refrained from campaigning and publicly supported his Kremlin-backed rival.

His victory was a humiliating setback to the main Kremlin party, United Russia, which also lost its control over the regional legislature. During his time in office, Furgal earned a reputation as a “people’s governor,” cutting his own salary, ordering the sale of an expensive yacht that the previous administration had bought and offering new benefits to residents.

Russian President Vladimir Putin named Mikhail Degtyaryov, a federal lawmaker who is also a member of the Liberal Democratic Party, to replace Furgal, a choice that was apparently intended to assuage local anger. Degtyaryov has not yet faced the protesters.