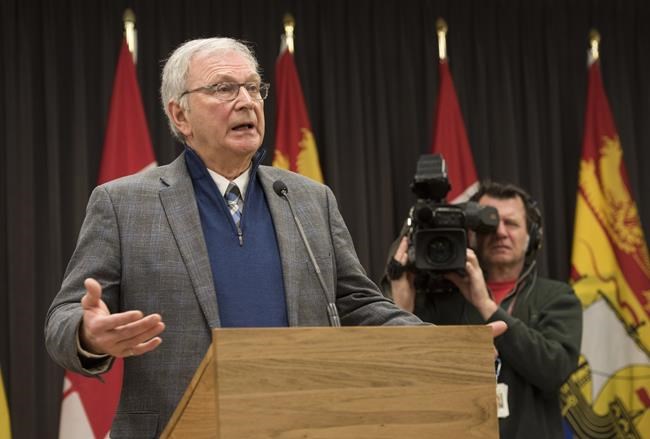 FREDERICTON — New Brunswick's premier says he's willing to call an election as early as next week if opposition parties refuse a deal to keep his minority government in power until the fall of 2022, or until the COVID-19 pandemic is over.

Blaine Higgs told reporters today he would "absolutely" call an election if talks fail, adding he needs all three opposition parties to agree not to topple his government.

The premier says he is concerned Green Leader David Coon has already rejected the proposal before talks begin.

On Monday, the Progressive Conservative leader proposed that he and the leaders of the opposition parties sign a formal agreement not to trigger an election until September 2022 or no earlier than 30 days after the pandemic is declared over by public health officials.

Negotiations between the Conservatives, Liberals, Greens and People's Alliance are set to begin Wednesday, with further talks scheduled for Thursday and Friday if necessary.

Higgs says early fall is an opportunity to hold an election, as there is a "lull" in the rate of infections from the novel coronavirus in the province.

"At this stage we have a window ... to decide if we can map out our priorities together," Higgs told a news conference. "This window isn't something that will last for a long period of time ... That's why the timelines are set."

Earlier in the day, however, Coon said Higgs' proposal would remove the ability of the opposition to raise criticism, adding it potentially subverts parliamentary democracy. The Green leader instead proposed to have consultations on what is contained in the throne speech and in the budget.

"It (Higgs' proposal) would have me signing a blank cheque for budgets we haven't seen and throne speeches that haven't been written," said Coon.

"I need agreement from all parties," he said, adding he can't rely solely on Liberal support.

The Conservatives and Liberals each have 20 seats in the legislature, while the Green and the People's Alliance parties each have three. There is one independent and two vacant seats.

On Monday, Liberal Leader Kevin Vickers said he was warm to Higgs' deal, adding the premier's willingness to work with the other parties to avoid an election was "excellent news for New Brunswickers." Vickers was not available for comment today.

The government's proposal calls for a formalization of the all-party COVID-19 cabinet committee to ensure the other parties have a voice in pandemic decision-making and in the province's economic recovery plan.

The premier said the deal would also include a mutually agreed legislative agenda "including proposals from each participating party."

Kris Austin, leader of the People's Alliance, said in a news release he's optimistic a "mutually agreed upon declaration can be made" with the Tories. His party had an informal agreement to keep the Progressive Conservatives in power, but the deal expired in March.

Austin said in the "unfortunate event" an agreement can't be reached, he believes it important to "respect the decision of voters and allow the democratically elected legislature to continue to operate within its four-year mandate."

This report by The Canadian Press was first published Aug. 11, 2020.

— By Michael Tutton in Halifax.