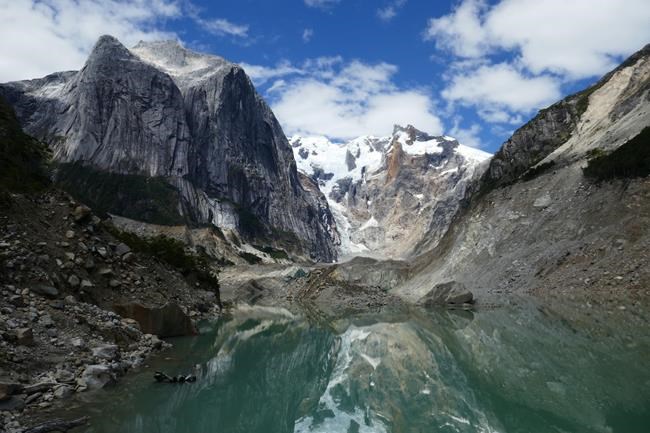 "Unsurprisingly, we found those lakes are growing," said Dan Shugar, a geographer at the University of Calgary. "What was surprising was how much."

The fact that glaciers around the world are shrinking due to climate change is well-established. What hasn't been so well studied is where all that water is going.

In a paper published Monday in Nature Climate Change, Shugar and his colleagues provide the first global assessment of how much water is contained in so-called glacial lakes and how quickly that volume is increasing.

That assessment wasn't possible until a few years ago, when computers finally became powerful enough to work through a world's worth of data and 250,000 satellite images.

Glacial lakes form when meltwater from glaciers is prevented from draining by the ice itself. They form on top, in front, beside or even underneath a glacier.

They are growing at a rapid pace everywhere glaciers are found. Shugar and his colleagues estimate that the amount of water those lakes hold has increased by almost 50 per cent since 1990.

The total volume is calculated to be an almost-unimaginable 158 cubic kilometres of water. That's a cube of icy cold water almost 5.5 kilometres long, wide and high.

Many glacial lakes are located in thinly inhabited locales such as Greenland. Others are in places like the Himalayas, where they sit alongside villages and communities.

Their volume across the country, including those in the High Arctic, has increased about 20 per cent and they hold about 37 cubic kilometres of water, Shugar said. The lakes in British Columbia and Yukon have increased even more quickly, almost doubling in volume over the last 30 years to 21 cubic kilometres.

They can present a hazard. Because the water is only held back by ice, glacial lakes are prone to sudden events called glacial lake outburst floods.

"In western North America, the risks aren't as high (as the Himalayas), but they certainly aren't zero," said Shugar.

And when they go, they go "absolutely gargantuan," Shugar said.

In 1996, an outburst flood in Iceland created what was for a couple of days the second-biggest river in the world. A 1930s outburst from the Chong Khumdan glacier in the Karakoram range sent a wall of water, mud and debris nearly 26 metres high down the Indus River for about 1,500 kilometres.

Shugar said he's not able to tell yet if GLOFs, as they are known, are becoming more frequent.

But he warns that water managers are going to have to keep an eye out for them as climate change continues to melt glaciers and fill lakes.

"Even here in the Rockies we may see increased development of these lakes," Shugar said.

"This is an evolving hazardous landscape. This is something that needs to be constantly revisited."

This report by The Canadian Press was first published Aug. 31, 2020