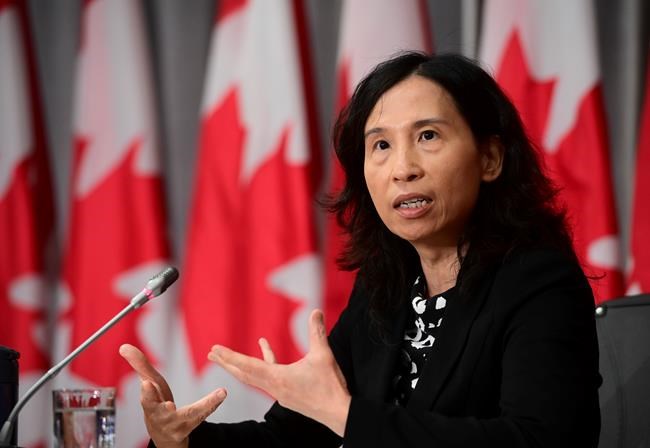 With the final long weekend of the summer season upon us, Dr. Theresa Tam said Canadians need to consider their own risk factors and the details of plans for any in-person gatherings with friends and family.

And they should be asking themselves some important questions, she said.

"Are you at high risk of developing serious complications if you become infected?" Tam asked rhetorically.

"Or if you would have to self-isolate, would this seriously disrupt your upcoming plans?"

Knowing the people you're with does not protect you from catching the virus that causes the respiratory illness, Tam warned.

And Canadians need to consider whether people they live with are at high risk of contracting the virus, she said.

After months of dealing with the novel coronavirus, government agencies, employers and individuals understand COVID-19 better now, so the situation Canadians are facing is different from the one in the spring when the disease first began to spread widely, Tam told reporters in Ottawa.

But there is renewed concern that the number of cases could balloon out of control still.

An average of 525 COVID-19 cases a day have been reported in Canada the past week, a noticeable uptick from earlier in the summer, and schools are reopening across the country.

In Ontario, Premier Doug Ford criticized hosts of backyard parties, whom he blamed for new cases in his province. Friday, Ontario reported 148 new COVID-19 infections, nearly half of them in a suburban region just west of Toronto.

Tam said contagion in private settings is a major concern now, but at the same time local health authorities will order fresh closures and reductions in public activities if they're needed to suppress new outbreaks. Those shouldn't be needed if people follow public health advice, she said.

British Columbia's top doctor warned this week that there is the potential for an explosive spread of COVID-19 cases over the Labour Day long weekend.

"Choose to spend time with your household bubble instead of a group of strangers and choose to use those layers of protection wherever you go," Henry said Thursday.

Quebec Premier Francois Legault declared Friday that the contagion was under control in his province, despite authorities there reporting more than 180 new COVID-19 infections for the second consecutive day.

Still, Legault urged Quebecers to be prudent ahead of the long weekend.

"I am asking you not to let your guard down," he said.

Tam said downloading the government's COVID Alert app is one way to mitigate the risks of catching and spreading the illness unknowingly although it is currently only operational in Ontario and Newfoundland and Labrador.

Quebec has said it does not plan to use the app, but announced Friday that it will launch its own alerting system.

Health Minister Christian Dube told a Montreal news conference the system will allow regions to be designated by zone, depending on the number of COVID-19 cases found in those regions.

Details of the system were to be revealed Tuesday, although Dube compared it to the warning notice boards already found in certain parks in Quebec.

This report by The Canadian Press was first published Sept. 4, 2020.