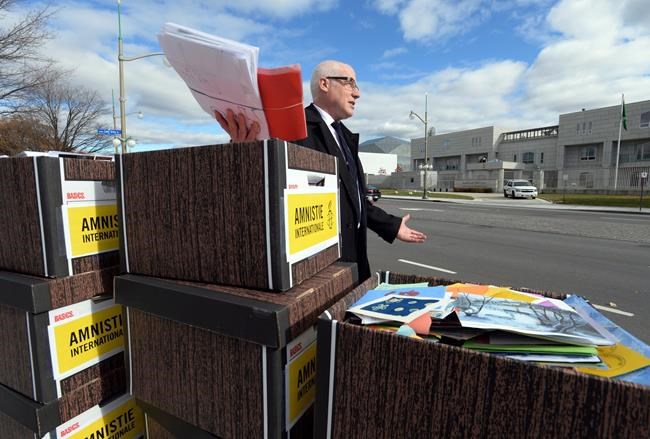 OTTAWA — Canada is failing to bring suspected war criminals to justice, a prominent human-rights organization says in a new report that calls on the Trudeau government to take several steps to ensure the country is not a safe haven for perpetrators.

The report released Tuesday by Amnesty International depicts the federal Crimes Against Humanity and War Crimes Program as underfunded and underused.

Twenty years ago, Canada enshrined in federal law universal jurisdiction for genocide, crimes against humanity and war crimes, meaning these offences are considered criminal acts in Canada even when they are committed abroad.

But only two people, both linked to the Rwanda genocide of 1994, have been prosecuted under the legislation.

Amnesty points to the case of Bill Horace, a former Liberian warlord, as evidence of Canada's poor record in the years since.

It notes that Horace, who was shot to death in June in London, Ont., had been widely accused of committing mass murder, rape and torture in Liberia during the 1990s.

"Despite a mountain of evidence against him, Canadian officials never charged Horace, allowing him to live freely in this country since he first arrived in 2002," Amnesty International Canada said in making the report public.

More often than not, Canada washes its hands of its responsibility, failing to take any action to prosecute alleged war criminals or opting to deport them without any guarantees they will be investigated for their misdeeds, said Alex Neve, secretary-general of Amnesty International Canada.

"Canada must do everything to ensure that such individuals face justice, rather than evade justice, in Canada."

In a joint statement Tuesday, the offices of Justice Minister David Lametti and Public Safety Minister Bill Blair said the Liberal government is committed to investigating such cases to the full extent of the law.

"Our government continues to work to prevent war criminals from entering Canada, while deporting and revoking the citizenship of war criminals in Canada involved in such acts, and prosecuting criminals where appropriate," they said.

"Canada's War Crimes Program is an internationally recognized model whereby its members are sought out for advice, training and assistance by other countries setting up their own programs."

The Amnesty report was co-ordinated by Sebastien Jodoin, Canada Research Chair in Human Rights and the Environment at McGill University, and developed with the input of lawyers, legal scholars, and law students.

It follows a 2016 federal evaluation of the program that found "a strong undercurrent of opinion that Canada’s leadership has waned or is at risk of waning."

The $15.6-million budget for the war-crimes program has remained static over the years, but the costs of conducting investigations "have risen significantly," the Amnesty report says.

It says that although Canada has defined crimes against humanity as an offence under national law, it has not included the crimes of enforced disappearance, apartheid, extrajudicial execution or forcible transfer of populations under domestic law.

In addition, there are "numerous other obstacles" to prosecution in universal jurisdiction cases, such as differing principles of criminal responsibility than those found in international law.

Canada is a haven for political or military offences because individuals cannot be extradited for such crimes, the report adds.

It urges the Canadian government to boost the resources of the federal program, improve the protection of victims and witnesses, and remove various legal and political obstacles to prosecution.

— Give the Crimes Against Humanity and War Crimes Program sufficient resources to investigate individuals suspected of having committed a crime under international law and to prosecute them in a Canadian court;

—  Ensure that extradition or criminal investigation will be pursued over deportation when there are reasonable grounds to believe an act of torture has been committed outside Canada by an individual subject to the jurisdiction of Canada;

— Ensure the criteria for deciding whether to investigate or prosecute crimes under international law are developed transparently in close consultation with civil society and exclude all political considerations;

— Enable victims and their families to file civil claims for all manner of reparations in civil and criminal proceedings based on universal jurisdiction over crimes under international law;

— Improve co-operation with investigations and prosecutions in other states.

This report by The Canadian Press was first published Sept. 8, 2020.