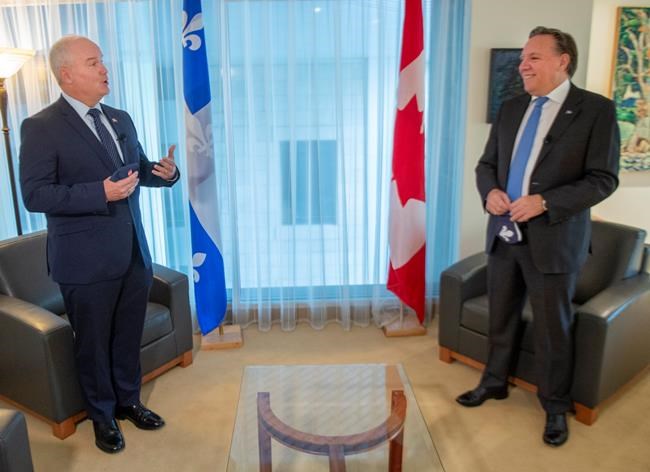 MONTREAL — Conservative Leader Erin O'Toole said he supports Quebec's ban on religious symbols and that he wouldn't launch a legal challenge against it, following a meeting Monday with Premier Francois Legault.

Canada is facing a national unity crisis, O'Toole told reporters after his first in-person meeting with a premier since winning the leadership race in late August. The federal government, therefore, shouldn't be interfering with the independence of provincial legislatures, he said.

"We have a national unity crisis at the moment — particularly in Western Canada — and I did speak to the premier about that," O'Toole said. "We need a government that respects provincial autonomy and provincial legislatures."

O'Toole said he served in the military with practising Sikhs who wore turbans, "and I understand it's a difficult question."

"But as a leader, we have to respect the Constitution and the partnerships we have in Canada."

Quebec's secularism law, commonly known as Bill 21, bans certain public sector workers from wearing religious symbols on the job. It is currently being contested before the courts and the federal Liberals have criticized the bill.

O'Toole also said large, federally regulated companies such as banks as well as airports should be forced to adhere to Quebec's strict language laws. Quebec's minister for the French language recently signalled he plans to subject federal companies such as Via Rail to the province's language law — known as Bill 101 — which would require them to operate in French.

"I told (Legault) personally I think large federal institutions should respect the French-language provisions in Quebec," O'Toole said. "I think it's a question of respect and I understand the priority of protecting a language, culture and identity."

O'Toole said much of the discussion with Legault centred on relaunching the country's economy following the COVID-19 pandemic induced shutdowns. That included what he termed a frank discussion on pipelines — which the Quebec government is opposed to building on its territory.

Legault said last year there is "no social acceptability" for an additional oil pipeline in the province. In 2017, TransCanada abandoned the cross-Canada pipeline dubbed Energy East after protests in Quebec and after changes to the environmental assessment process.

The Conservative leader said he spoke with Legault of the importance of pipelines in Western Canada, acknowledging that Energy East is "not on the table" but that the two men did discuss a proposed liquefied natural gas project in Quebec's Saguenay region.

"There are projects that will help us get a better price for Canadian resources," O'Toole said. "This is a resource that is important to our national interest, we'd better get the best world price we can.

"We had a good, frank conversation and he knows my priority is to get Canadian goods to market and the pipelines will help do that."

O'Toole also said it was important for him to hold his first meeting in Quebec — the Conservative leader was born in Montreal and has high hopes for increasing the Tory footprint in the province.

"We’ve got a great caucus from Quebec right now," he said. "I want to double or triple that caucus so we’re going to work very hard to earn the trust of Quebecers."

Daniel Beland, director of the McGill Institute for the Study of Canada, said meeting with Legault first has important symbolism attached to it.

Legault's Coalition Avenir Quebec party has strong support in rural and suburban Quebec — the same pool of voters O'Toole will want to target, Beland said in an interview Monday. The big challenge, he added, will come from the Bloc Quebecois, who also draw from the nationalist voter pool who support Legault's party.

Beland said tripling the number of MPs might be ambitious but it wouldn't be hard for O'Toole to do better than his predecessor, Andrew Scheer.

"Will it succeed? A lot will depend on whether Quebecers will want to bet again on the Bloc as the main opposition party to go after the Liberals or, if they don't like the Liberals, if they will be tempted by the Conservative message," Beland said.

"The Conservatives can do better in Quebec and especially outside Quebec City, which is their stronghold."