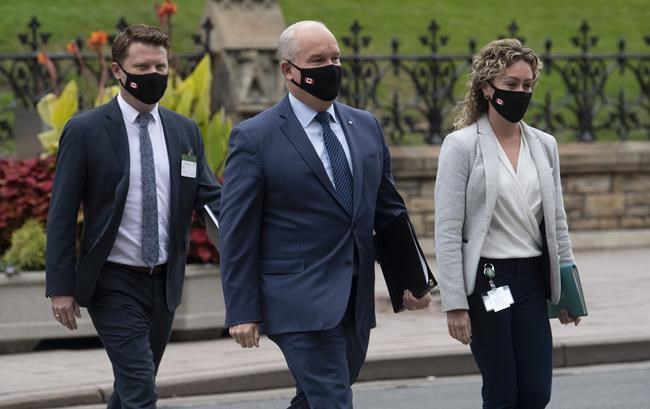 OTTAWA — Federal Conservative Leader Erin O'Toole says he, his family and some party workers are in self-isolation after an aide tested positive for COVID-19.

A statement from the party says the O'Tooles are getting tested, informing the Opposition leader's recent contacts and keeping his son home.

"My family and I are feeling well, but we take COVID-19 very seriously," O'Toole said in the statement.

"Today was going to be Jack’s first day back at school, but instead we will be getting tested and self-isolating per public health guidelines. The health and safety of my family and all Canadians is my top priority."

O'Toole was to appear at a party event in Alberta Wednesday evening, part of a mini-tour of the Conservative heartland in the West.

And he was just in Quebec, where he met Premier Francois Legault on Monday.

The Conservatives say the staffer who has the respiratory illness was travelling with him.

The federal parties are still sorting out how the House of Commons will function when it resumes next Wednesday. The Liberals favour a hybrid model, with some MPs in the chamber and others participating via videoconference with a mechanism for voting online.

The Conservatives have been arguing for MPs to participate in person only, with limits on the number of members in the chamber at a time and staggered voting when it's needed.

Bloc Quebecois Leader Yves-Francois Blanchet is also in self-isolation, awaiting the results of his own COVID-19 test after both his spouse and an aide tested positive for the illness.

Blanchet's aide's positive test, a few days after the Bloc caucus met in person in St-Hyacinthe, Que., prompted dozens of MPs and party workers to isolate themselves.

This report by The Canadian Press was first published Sept. 16, 2020.