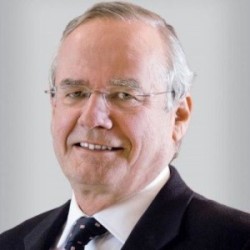 History chooses its battles. The turning points of history are often identified well after the events have taken place, sometimes decades or even centuries later.

The Battle of Britain, however,  in which the Royal Air Force held off the German Luftwaffe in the summer of 1940, didn’t take long to be considered by military historians as the greatest air battle every fought.

Every September 15th, which is officially Battle of Britain Day, my wife, the Honourable Carolyn Bennett, and I attend the Battle of Britain Commemorative Service at Westminster Abbey in honour of my late father, who flew in the Battle as one of Churchill’s “Few”. Following the Service, the congregation of over 2,000, including Prince Charles and Camilla, streams out of the Abbey to join a silent throng of Britons lining Parliament Square.

When Big Ben finishes tolling twelve, two propeller aircraft approach as if out of the past, across the Thames, flying low over the Ministry of Defense and Whitehall, past Big Ben and the Houses of Parliament, now rushing overhead, their signature Rolls Royce Merlin engines roaring, a single-engine Spitfire and Hurricane, the living symbols of the David-and-Goliath struggle that was the Battle of Britain. The Spitfire dips its wings in salute and they vanish behind the stately Regency architecture and Victorian statuary they defended so many years ago.

We are left alone with nothing but the sounds of London traffic. After a few seconds, the crowd starts to applaud, their leather gloves clapping, for at least a full minute, many with tears in their eyes.

This September 15th will mark the 80th Anniversary of the famous battle. The Covid-19 pandemic will prevent a Commemorative Service at Westminster Abbey, but it will not erase its remembrance. Why does this battle, still stir the hearts and minds of Britons, most of whom had not yet been born in 1940?

Firstly, the stakes couldn’t have been higher. The numerically superior and more experienced Luftwaffe was tasked with the destruction of the Royal Air Force to clear the way for Operation Sea Lion, the Invasion of Britain, scheduled by Hitler and the German High Command for the high tides of early August and September, 1940.

Britons remember that it was the first and last battle fought against an invading force on English soil since the Battle of Hastings in 1066. The Spanish Armada in 1588 had been repelled at sea before being able to land.

Secondly, the dogfights of the battle above were watched every day by millions of ordinary citizens, like a football game with the score announced on the evening news. Britons held their breath as the fighters described arcs of white contrails in azure, summer skies above and deadly bursts of staccato machine gun fire echoed on the ground below. Combatant aircraft from each side would horrifically fall from the sky and explode in the village greens, meadows and streets of their daily lives.

The enemy was the faceless, monolithic Reich in black and silver with a black cross identifying its dark purpose, while the defenders were dashing young men from Britain and the Commonwealth, including 80 Canadians pilots, flying the faster and more agile Spitfires and Hurricanes, which were decorated with

bright red, white and blue roundels. As one of our sons once said, “You mean, sort of like Luke Skywalker and the Force against Darth Vader and the Empire?” Yes, by all accounts quite a bit like that.

The climax came on September 15, 1940, when the Luftwaffe sent its full force of bomber aircraft, 1,210 in all, across the Channel to deliver a final knock-out punch and destroy the Royal Air Force and its exhausted pilots once and for all.

But they couldn’t get it done.

Time and again, the young British and Commonwealth pilots, joined by Poles, Czechs and seven Americans, would take off from their grass runways in their Spitfires and Hurricanes to confront the ‘Empire’, shooting down the invaders or being shot down themselves, returning to base to refuel, falling instantly asleep in their cockpits from combat exhaustion, and taking off again.

September 15th, 1940, was the turning point in the battle and a turning point in history. Two days later, on September 17th, British intelligence intercepted an order from the German High Command to stand down invasion forces and materiel. With autumn storms approaching in the Channel and the Royal Air Force still controlling the skies, Operation Sea Lion was postponed indefinitely. The victory of the Allied pilots was the first defeat of the vaunted German war machine in the course of the War, allowing the Western world to fight on, for the Americans to arrive, and for victory to be ultimately achieved.

One of the RAF Spitfire pilots in the air on September 15th, 1940, was my 22 year-old father to be, Flight Lieutenant Peter Geoffrey St. George O’Brian from Toronto, whose father Geoff O’Brian had been a Royal Flying Corp pilot in World War I and whose younger brother Jim O’Brian was an RCAF Spitfire pilot in the Italian campaign. That day Peter O’Brian shared in the destruction of a Heinkel 111 just off the south coast. There had been no time before ‘scramble’ to test the newly-installed wing cannons on his aircraft. Ammunition aboard the small fighter was limited and it was out of the question to waste it by shooting off some rounds after take-off. The first time he fired the guns was at the enemy aircraft. As he said in a television interview many years later, with typical understatement, “Fortunately, they worked”.

Military analysts have pointed out that, if the Luftwaffe had prevailed in the Battle Britain, it was not a given that the German forces could have successfully invaded the island of Britain considering that Britannia still “ruled the waves” and the Royal Navy would have fought to the death at sea, not to mention the British Army and the English people themselves on land. But the brave young men in their flying machines came to symbolize Britain’s defiance against the odds.

The Battle of Britain is further enshrined by one of the most extraordinary and moving tributes to men at arms ever given.

Prime Minister Churchill made a visit to the RAF operations bunker at Uxbridge on August 19th and watched with alarm as the plotting table filled with markers representing the incoming squadrons of the Luftwaffe and not enough Royal Air Force squadrons to intercept them all. When he asked Air Vice-Marshall Keith Park what he had in reserve, Park replied, “Prime Minister, we have nothing in reserve”.

According to his military attache, General Hastings Ismay, Churchill was deeply moved by what he had seen and a few minutes after leaving the bunker first uttered a version of the famous statement.

The next day in the House of Commons, in what Boris Johnson calls “Churchill’s mobilization of the English language”, he delivered his tribute, “Never in the field of human conflict was so much owed by so many to so few”.  Of the 2,956 allied fighter pilots of the Battle of Britain, who became forever known as “The Few”, almost a fifth of them, 544, including 20 Canadians, lost their lives in the Battle of Britain and fully half did not survive the War.

My father always said in later years that he counted himself not as one of “The Few”, but one of the “The Many”. Everyone in all military and civilian services, he argued, answered the call and did the job necessary to turn back the Nazi invasion of Britain.

“The Few”, in his view, were those who gave their lives in doing so.

Peter O’Brian is an accomplished independent film producer, director and writer, whose movies have won 19 Genie Awards. In 2014, he was reappointed as the Chair of TVO’s Board of Directors for a fifth term.  He is a founding board member, and former Executive Director, of the Canadian Film Centre.  He has also served on the board of the Toronto International Film Festival and the Academy of Canadian Film and Television. In 2012 Peter O’Brian was awarded the Queen Elizabeth II Diamond Jubilee Medal and in 2013, he was honoured with the Directors Guild of Canada’s Honourary Life Member Award.
The views, opinions and analyses expressed in the articles on National Newswatch are those of the contributor(s) and do not necessarily reflect the views or opinions of the publishers.
Click here for more political news headlines
Tweets by @natnewswatch