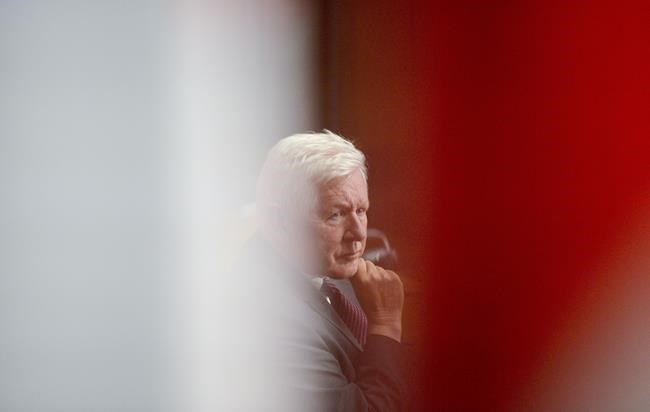 OTTAWA — Two months after Canada lost the election to the United Nations Security Council, the country’s new ambassador was there anyway, speaking frankly about the Syrian civil war. He wasn’t making many new friends.

Bob Rae, the career politician appointed as Canada’s new UN envoy in New York, was addressing a special session of the UN’s most powerful body this past Tuesday, on behalf of Australia and New Zealand.

Russia intervened in Syria’s nine-year-old civil war in 2015, to support a longtime ally while prolonging a conflict that has left 400,000 people dead.

Russia is also one of the five permanent members of the Security Council, with China, the United States, Britain and France.

That has allowed Russia to wield a veto that has largely paralyzed the council in preventing further suffering in Syria.

"It was a tough discussion with the Russians. They were not happy with us. But they have to know where you stand," Rae said in an interview from New York this past week.

"Being a diplomat doesn't mean you have nothing to say."

Few, especially Rae’s fiercest critics, would accuse the 72-year-old career politician of having little to say.

That has not changed since Rae arrived in New York in August, to replace Marc-André Blanchard, a diplomatic shuffle that occurred after Canada lost its bid for a two-year stint on the council to Ireland and Norway in mid-June.

The loss thumped the morale of Canadian diplomats but Rae said no one was preoccupied with it when he arrived in late summer.

"It's over. And the other reality is that the Security Council has not exactly been a beacon of leadership and decision-making in the last while," he said.

Canada’s UN work is continuing, with Rae pushing forward the same agenda the country unsuccessfully campaigned on to win a council seat: working with other countries and international organizations to help rebuild a global economy that has been battered by COVID-19.

This past week, Prime Minister Justin Trudeau, his Jamaican counterpart Andrew Holness, and UN Secretary-General Antonio Guterres convened the second major meeting of the UN’s High-Level Event on Financing for Development in the Era of COVID-19 and Beyond. It featured numerous world leaders and heads of major international organizations, including the World Bank and the International Monetary Fund.

They first met in late May, less than three weeks before the Security Council vote.

Rae said the council is "not functioning as well as it needs to" so other countries, including Canada, are forming other alliances. "The Canada-Jamaican initiative is an example of that. Countries just say, 'If we're not going to get any leadership from there, we better figure out where it's going to come from.'"

Before arriving in New York, Rae tabled a report for the prime minister on his work as envoy on refugee and humanitarian issues, an appointment he accepted in January.

It is a sweeping document that reads like a foreign-policy manifesto. It calls for a co-ordinated response to the pandemic, forced displacement and higher spending on foreign aid.

Foreign Affairs Minister Francois-Philippe Champagne said Rae’s insights as well as his most recent work as a special envoy for the government on the crises in Myanmar and on global migration will make him effective at the UN.

"Certainly, Ambassador Rae’s experience and knowledge comes at an important time in how we see the world. Pax Americana is probably behind us," Champagne said in an interview.

"Now we need to see what’s our interests, our values and our principles. We can advance them with our traditional partners, and also with new alliances around the world."

Rae’s report highlights Canada’s continually low spending on foreign aid, something that appeared to be addressed this week when Trudeau announced an added $400 million to the budget in his event with Holness and Guterres.

"The numbers speak for themselves. And I think it's important for us to, to continue to deal with that as Canadians. It's not just an issue of one government or another, if you look back historically. It's an issue that really transcends political parties," said Rae.

In his report, Rae noted "Canada has never come close" to the UN benchmark on aid spending that was established by former Canadian prime minister Lester Pearson: 0.7 per cent of gross national income.

After having been an MP, NDP premier in Ontario, interim leader of the federal Liberals and the party's foreign-policy critic, he feels he has come full circle. His father, Saul, spent 40 years in Canada’s foreign service, serving stints as UN ambassador in New York and Geneva.

"I grew up in that household and I grew up thinking about foreign policy and Canada's place in the world. So, I never lost interest in it."

Rae said his new diplomatic career is also informed his experience dealing with the crisis in Myanmar that forced 700,000 Rohingya Muslims to flee to neighbouring Bangladesh in 2017 after their country’s military killed, raped and burned villages.

Rae visited Cox’s Bazar in Bangladesh, a town that has become the world’s largest refugee outpost, and has publicly pushed the government to do more to help. He has also consulted on a case in the International Court of Justice that is trying to bring the perpetrators of genocide to justice.

"I think it's important for us to really appreciate just how really, really difficult life is for a lot of people: the combination of climate and disease and political conflict — the pain that is inflicted on people," he said.

"When you see things first hand and experience it, you come to understand it," Rae added. "When I hear speeches about this, or that, denying the reality of certain situations, you just sort of say, 'well, no, that's just not true.'"

This report by The Canadian Press was first published Oct. 4, 2020.