‘Another upheaval:’ Toronto board moving hundreds of elementary teachers online 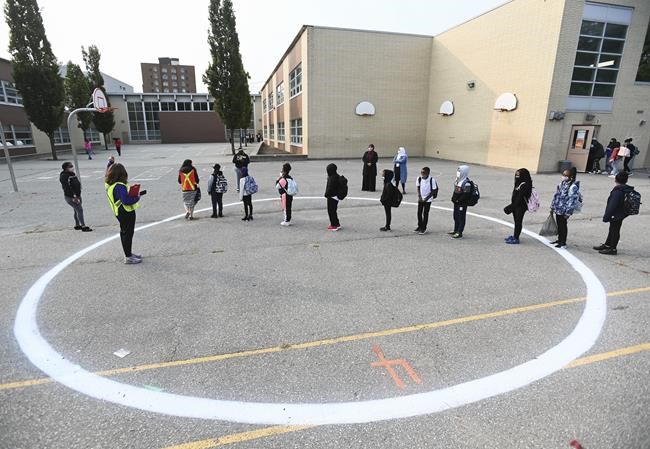 TORONTO — Hundreds of elementary school teachers will trade the chalkboard for the keyboard next week as Canada's largest school district adjusts to soaring enrolment in online education.

The Toronto District School Board plans to reassign about 570 teachers to its "Virtual School" platform as it tries to ensure all students taking classes online have access to a full-time teacher, a spokesman said Wednesday.

More than 63,000 elementary students have opted for virtual learning this year, according to a statement the board sent to parents on Tuesday. Many still haven't been assigned a teacher, instead learning through "asynchronous" material provided by the board.

"At the same time, we also have significantly lower class sizes in our in-person, or bricks-and-mortar schools," spokesman Ryan Bird said, noting some classes designed for 24 students have as few as eight or 10.

"I recognize (that) is ideal when it comes to physical distancing, but ... we just don't have enough money to be able to staff those for the remainder of the year at those significantly lower numbers."

Because the reorganization will have students interacting with new "cohorts," the board said it will also take a number of measures to prevent the spread of COVID-19, including enhanced cleaning and retaining details for contact tracing.

Bird said the majority of elementary schools will not see significant changes, but a handful will lose more than four teachers. A detailed breakdown of the changes was not available Wednesday, Bird said, as the board was still informing parents of the impact to their kids' schools.

Lisa Parker, the head of a parents' group from North Toronto, said two teachers at her son's school were being moved to online learning. As a result, she said, dozens of students will have to switch classrooms, working with a new teacher and interacting with new cohorts after just two weeks of relative stability.

"They've just started to feel normal and things are getting back to normal and now, you know, another upheaval," said Parker, the chair of the Allenby Parents' Association.

The local teachers' union said that upheaval is a direct result of the Ministry of Education not taking proper measures early on in the pandemic.

"The government has set this up to fail. They have not funded a proper return to school. They have neglected their duties," Jennifer Brown, president of the Elementary Teachers of Toronto, said in an interview.

Brown called on Premier Doug Ford and Education Minister Stephen Lecce to overhaul the school funding formula, in which enrolment is the primary factor.

Lecce said Wednesday that the province is providing school boards with the funding they need to safely deliver a "quality educational experience" to all students, pointing specifically to more than $12 million the government allocated this week to school boards in Toronto.

"Our commitment is just to do whatever we can to ensure they succeed," Lecce told reporters.

This report by The Canadian Press was first published Oct. 7, 2020.