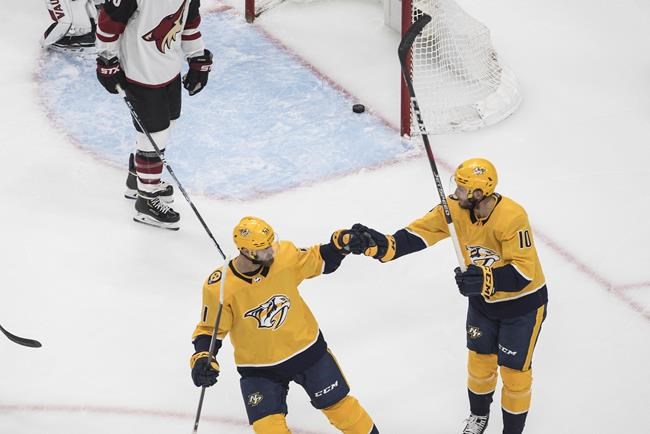 OTTAWA — The Ottawa Senators acquired winger Austin Watson from the Nashville Predators on Saturday in exchange for a fourth-round pick in the 2021 NHL draft.

The six-foot-four, 204-pound Watson was reinstated by the NHL in March 2019 after he entered the follow-up phase of the league's substance abuse program.

He started that season suspended and was banned again Jan. 29 as he entered the second stage of the league's substance abuse and behavioural health program.

The Predators said in a statement at the time that they would have no further comment on Watson's reinstatement "because of the personal nature" of the situation and due to their "exclusive focus on Austin and his family's well-being."

Watson pleaded no contest in July 2018 to domestic assault and agreed to a judicial diversion program that enabled the misdemeanour charge to be dismissed if he served three months of probation and completed an in-patient treatment program and a batterer's intervention program.

His girlfriend issued a statement that October taking blame for the incident in a gas station parking lot that led to Watson's arrest. Watson later shared in an Instagram post that he'd been dealing with anxiety, depression and alcoholism since the age of 18.

The move for Watson is the latest in what has been a busy week for Ottawa. The club selected winger Tim Stuetzle third overall and defenceman Jake Sanderson with the fifth pick as part of a 10-player haul at the draft, and also acquired goalie Matt Murray from the Pittsburgh Penguins via trade.

Murray then signed a four-year, US$25-million contract with the team on Friday.

Watson is set to begin a three-year, $4.5-million deal he inked with Nashville last October.

"Austin Watson is a big, strong winger who will bring a significant presence to our forward group," Senators general manager Pierre Dorion said in a statement announcing the trade. "He was among Nashville's forward leaders in blocked shots last season, was the team's leader in hits and is someone who is especially physical on the forecheck.

"We also expect him to be a valuable asset on our penalty kill."

This report by The Canadian Press was first published Oct. 10, 2020.