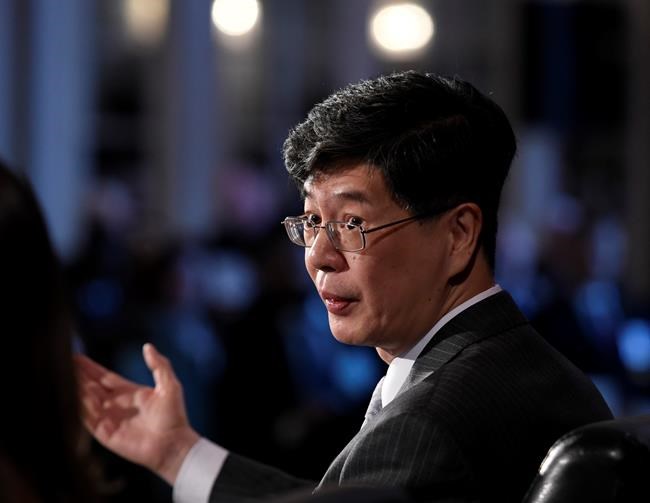 OTTAWA — The Chinese ambassador to Canada is warning the Trudeau government not to grant asylum to Hong Kong residents fleeing a widely criticized national security law imposed by Beijing.

"We strongly urge the Canadian side not (to) grant so-called political asylum to those violent criminals in Hong Kong because it is the interference in China's domestic affairs. And certainly, it will embolden those violent criminals," Cong said Thursday in a video press conference from the Chinese Embassy in Ottawa.

Hong Kong was supposed to operate under a "one country, two systems" agreement after Britain handed its former colony over to Beijing in 1997 under an international agreement.

Cherie Wong, the executive director of Alliance Canada Hong Kong, said Cong’s comment is a "direct threat" to all Canadians.

Wong said China’s has "ignored, trampled on, and now torn to shreds" its handover agreement for Hong Kong by enacting the new national-security law.

"Their actions are the reason that many Hong Kongers are seeking asylum in Canada, because they no longer feel safe in Hong Kong or their human rights will be protected in Hong Kong under control of the new National Security Law," she said in a statement.

"It should not be lost on Canadians living in Hong Kong or China, they could be next. Ambassador Cong suggested so himself."

In a separate video conference on Thursday, a coalition representing 118 civil society organizations and Canadian politicians across party lines called on the government to take stronger actions against China for human rights abuses in Hong Kong, in Tibet, and against ethnic Muslim Uighurs in China’s southeastern Xinjiang province, as well as attacks on rights-defenders and lawyers.

Former Canadian justice minister Irwin Cotler, the founder of the Raoul Wallenberg Centre for Human Rights, called on the government to impose so-called Magnitsky sanctions on members of the Chinese government directly involved in violations of human rights. The measures are named for a jailed Russian businessman who died in state custody.

"We need to combat this culture of criminality and corruption in Xi Jinping’s China," Cotler told the video conference.

"Canada has imposed Magnitsky sanctions, visa bans, asset seizures on a variety of officials," he added.

"It is yet to impose any Magnitsky sanctions on any Chinese officials, though they have been committing the worst of crimes against humanity, and have been nurtured by the worst culture of impunity."

Cong rejected the criticism of China's broader human-rights record and invoked the long-held Chinese position that any comments on that record constitute interference in its internal affairs.

Cong also flatly rejected Prime Minister Justin Trudeau's assertion that China is engaging in coercive diplomacy by imprisoning two Canadian men in retaliation for the arrest of a Chinese high-tech executive on an American extradition warrant. Meng Wanzhou is living under house arrest in Vancouver while her case wends through a British Columbia court.

"We will remain absolutely committed to working with our allies to ensure that China's approach of coercive diplomacy, its arbitrary detention of two Canadian citizens, alongside other citizens of other countries around the world, is not viewed as a successful tactic by them," Trudeau said earlier this week as the two countries marked 50 years of diplomatic links at one of the lowest times in their relationship.

In December 2018, China imprisoned two Canadian men, Michael Kovrig and Michael Spavor, and charged them with undermining the country's national security. Cong said they are still undergoing a legal process in China, but he did not provide further details.

Kovrig and Spavor are being prosecuted "because they were suspected of engaging in activities, which endanger our national security," said Cong.

He reiterated his government's long-held demand that Canada release Meng immediately, but he said her case and the prosecutions of Kovrig and Spavor are not linked.

Cong said Canada's efforts to get other countries to garner support from other international partners is "doomed to fail."

The European Union raised concerns about Kovrig and Spavor, by name, in the communiqué for its recent summit with China.

"We oppose any remarks that interfere in our internal affairs. And I would like to point out, there is no coercive diplomacy on the Chinese side," Cong said.

This report by The Canadian Press was first published Oct. 15, 2020.