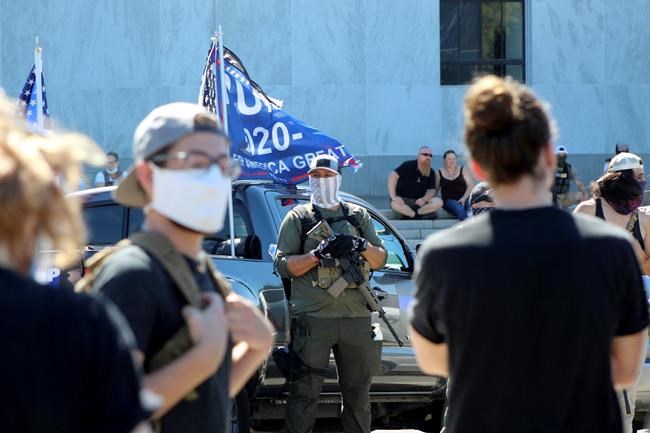 OTTAWA — Four more years of an inscrutable, unpredictable Donald Trump. Or a new chapter with a friendly, predictable Joe Biden.

Both options hung in the balance for Canada as the U.S. presidential election clawed through its unresolved Tuesday night cliffhanger offering no political certainty over who would occupy the foreign office most important to Canadian interests.

“Our federal government is absolutely ready. We have thoughtfully prepared for all eventualities and I am really confident that we have a plan no matter what happens," she said.

Tuesday's early results came as Americans went to the polls, capping a campaign marked by voter intimidation, threats of postelection violence, and concern about the potential breakdown of democracy itself.

Colin Robertson, a retired diplomat who served in multiple U.S. postings, said Canadians have every reason to be concerned about what has been unfolding south of the border, but now is not the time to take sides.

"What can we do? Keep calm, consult with the allies and, as (Prime Minister Justin) Trudeau said, prepare for all contingencies."

The first returns showed Trump, as expected, winning in Indiana and Kentucky. He also pulled ahead in Florida after an early see-saw for that crucial state.

It was going to be a long night that would likely not produce a definitive result, said Mark Feigenbaum, the Toronto tax lawyer who is the chairman of Republicans Overseas Canada.

"It's really encouraging that a lot of people are out voting. Whomever they're voting for, I think it's good," he said.

Early results showed Biden performing better than expected in Republican strongholds such as Texas and Ohio. Biden's strong showing in Ohio was significant because it represented a breakthrough in the Rust Belt that Trump dominated in 2016. But that gain appeared in doubt as Trump surged back in Ohio and started leading in Texas too.

Bruce Heyman, Barack Obama's second ambassador to Canada, cautioned: "Judging a game at half time or the first period, you just can't do it. You have to wait to the end."

The struggle for Florida, with its 29 votes in the electoral college, where a presidential candidate needs at least 270 votes to win, was closely watched. Trump won the state in 2016 and Biden was behind in the key county of Miami-Dade.

Bessma Momani, an international affairs specialist at the University of Waterloo, said it was too early to draw any definitive conclusions.

“People are just projecting their own hopes,” she said.

“The early voting is pretty spectacular. From the academic side of this, usually early voting does not indicate a vote for the incumbent.”

Earlier Tuesday, a new poll from Leger and the Association for Canadian Studies found a clear majority of Canadians surveyed worried that the United States will suffer a breakdown of its system marked by "social chaos" if no clear winner emerges.

That fear was driven by the assumption that Trump won't accept defeat if he does in fact lose, or may prematurely declare victory on election night before all votes, including mail-in ballots, can be legally counted.

The Leger poll found that three-quarters of those surveyed in Canada are worried about the U.S. election, and 68 per cent worry that there will be a "complete breakdown of the political system in the U.S. leading to a period of social chaos."

Four out of five respondents said they were concerned that increased racial tension would lead to protests and violence.

"It's a bit like watching your neighbour's roof catch fire," said Perrin Beatty, the president of the Canadian Chamber of Commerce.

"You're both fascinated and horrified."

The survey of 1,516 Canadians selected from an online panel was conducted from Oct. 30 to Nov. 1. Polls conducted this way do not come with a margin of error, since they are not considered random.

The survey delved deeper into Canadians' anxiety: The possibility of "significant civil unrest or violence" in the streets on election day or the following days worried 77 per cent of respondents; 72 per cent were concerned that Trump wouldn't accept the election result if he lost; 62 per cent were worried about a stock market crash.

Georganne Burke, an Ontario-based dual Canadian-American citizen who has campaigned for Trump in the U.S., blamed the Democrats for stoking fears of unrest and violence.

Burke said it was "hype" that Trump would refuse to accept a defeat.

"That's garbage. Will he be unhappy? Sure, he'll be unhappy. Will he say outrageous things? Probably. But he'll leave."

The Leger poll left no doubt who Canadians want to win the White House — 80 per cent favoured Biden.

Trudeau said Tuesday that Canada's job is to work with whomever American voters elect, and cited trade deals as particular evidence that his government has been able to work with Trump.

He said he would spend some time watching the results Tuesday night, though he acknowledged that word of a definite winner could take days or even weeks.

If there should be trouble in the U.S., Freeland said in response to a question about that possibility, Canadian diplomats will be prepared to assist Canadians living there.

"It is absolutely a responsibility of our government to be there for Canadians outside out country, and we will be there for them, too."

Sarah Goldfeder, now an Ottawa-based consultant and former U.S. diplomat under two American ambassadors, said Canadians must be vigilant to guard against the ideological infiltration of extreme, divisive politics into Canada.

"Literally, stores are boarded up across America right now, in anticipation of civil unrest in the streets. And that's not good for anybody that has to do business with the U.S."

This report by The Canadian Press was first published Nov. 3, 2020.