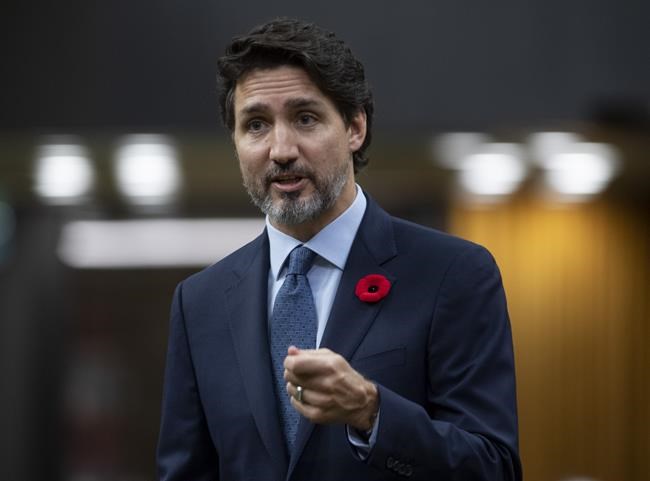 OTTAWA — Prime Minister Justin Trudeau affirmed his faith in the American people and their democratic institutions on Friday as the U.S. election results continued to trend in Democrat Joe Biden's favour.

Trudeau refused to be directly drawn in to responding to President Donald Trump's complaints — without evidence — that the counting of ballots in the U.S. election is corrupt.

Trudeau said foreign countries should not pronounce on the American electoral process, and that his job is to stand up for Canada's interests with its top trading partner and closest neighbour.

“We are watching, as everyone is, the processes in the United States unfold as their electoral process is underway," Trudeau said Friday in Ottawa in response to questions at a COVID-19 briefing.

"We will continue to have confidence in the American institutions that have managed their electoral processes over many decades and indeed, centuries."

Trudeau said everyone is "eager" to see a result and he would be watching closely.

"I think it is extremely important in electoral processes around the world that they be able to unfold in an appropriate way without foreign interventions, or interference with the elections," he said.

"We always think about the concern about hostile actors interfering or intervening in electoral processes. But even friends can have an influence on public discourse around internal processes that are key to defending democratic institutions."

Trudeau said that is why his government will "remain very cautious about making any pronouncements in regards to the electoral processes in the United States until the outcome is sufficiently clear."

The Organization for Security and Co-operation in Europe, which sent a monitoring mission to the U.S., expressed concern earlier this week about Trump's comments on the electoral process.

The OSCE said the Nov. 3 voting was well managed in a highly polarized environment and the challenges posed by COVID-19.

Biden opened up new leads over Trump in the battleground states of Pennsylvania and Georgia on Friday, as more mail-in ballots are still being counted.

Trump's lawyers have filed a series of legal challenges in states where the count is close.

Biden is currently leading in enough states to put him well over the 270 electoral college votes needed to win the presidency, but the election is still too close for The Associated Press to declare a winner.

New Democrat MP Peter Julian has seen enough and told the House of Commons that as far as he’s concerned, Biden and his running mate Kamala Harris have won the election.

"Clearly Joe Biden will become the next president of the United States," Julian said Friday in his member's statement to Parliament.

"This brings an end to the nightmare of the presidency of Donald Trump — someone who embodies dishonesty, misogyny, racism, and xenophobia, and who admires brutal authoritarian regimes."

This report by The Canadian Press was first published Nov. 6, 2020.