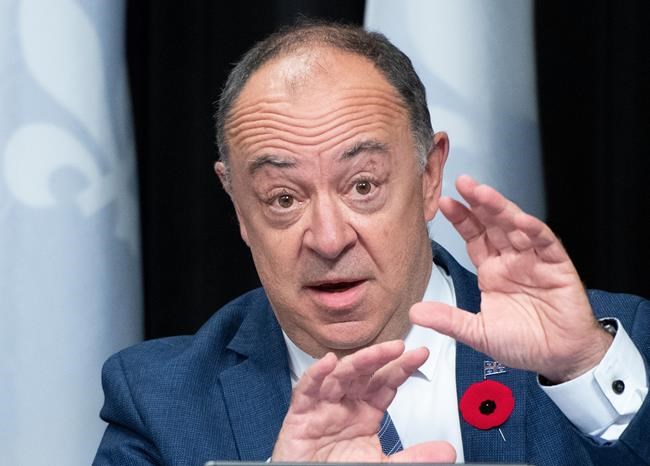 MONTREAL — As COVID-19 continues to spread outside Quebec's major cities, the province's health minister travelled Monday to the most affected region, Saguenay-Lac-St-Jean, north of Quebec City.

Speaking to reporters, Christian Dube warned that the situation there will get worse before it gets better. Several hours later, public health authorities announced that Estrie, a largely rural region east of Montreal, would be moved to the province's highest alert level.

The first wave of the pandemic in Quebec was concentrated in Montreal, with long-term care centres and health workers in the city particularly affected, said Roxane Borges Da Silva, a professor at Universite de Montreal's school of public health.

Currently, Montreal is slightly below the provincial average with 122 active cases of COVID-19 per 100,000 people, according to data from Quebec's national public health institute.

Saguenay-Lac-St-Jean, which was relatively unaffected by the pandemic in the spring, has more than 312 active cases of COVID-19 per 100,000 people. Public health authorities reported 94 new cases and eight deaths in the region on Monday.

While community transmission in Quebec was limited by the spring lockdown, it is now occurring in much of the province, Borges Da Silva said. Montrealers may be more sensitized to the pandemic and more aware of the sanitary measures needed to slow its spread, she added, but elsewhere in Quebec the impact has been less "tangible."

Borges Da Silva said one factor favouring the rural areas is that their smaller populations tend to be more dispersed, limiting the ability of the virus to spread.

Still, Dube said he expects the Saguenay region, which was moved to Quebec's highest COVID-19 alert level on Nov. 2, to continue to see an elevated number of new cases before the partial lockdown begins to have an impact.

Dube defended the decision not to move the region to the red alert level earlier, saying it had been reporting around 50 new cases a day before that jumped to around 100 new cases a day.

Dr. Leighanne Parkes, an infectious disease specialist and microbiologist at Montreal's Jewish General Hospital said long-term care facilities often struggle with the question of when to implement new measures to control the spread of the virus. It's a similar situation in rural areas.

"By the time you have detection based off of symptoms, you've probably had somewhere between five and seven, or 10 days of potential transmission," she said. People are most contagious early in the virus, until the day or day after they first show symptoms, she said.

Parkes said there needs to be a shift from reacting to the spread of the virus to trying to pre-empt it.

"This threat is out there, it might not have reached your community yet, but we have to act as though it's already present," she said.

Provincewide, Quebec reported 1,169 new COVID-19 cases and 15 more deaths linked to the novel coronavirus on Monday. The total number of infections in the province since the pandemic began now stands at 115,989, and there have been 6,455 deaths.

Dube said that while the situation has improved in some parts of the province, such as Quebec City and Montreal, it's continuing to worsen elsewhere, keeping the number of daily new cases in the province relatively stable at around 1,000.

He said the province has no plans to introduce further restrictions, but it won't be moving regions to lower alert levels until a positive trend has been seen over several weeks. Dube said he doesn't want to "play yo-yo" with the restrictions.

The Health Department reported Monday that the number of hospitalizations had increased by 13 to 540, while the number of people in intensive care dropped by one, for a total of 76.

Other rural regions have also reported high numbers of cases per capita. The national public health institute said Lanaudiere, north of Montreal, currently has 256 active cases per 100,000 people, while Gaspesie–Iles-de-la-Madeleine has 202 per 100,000 people.

Meanwhile, a private long-term care home in suburban Montreal where 38 residents died during the first wave of the COVID-19 pandemic in March will close permanently later this month.

Residence Herron was placed under government trusteeship in late March after regional health authorities found only three employees on site to care for 133 residents, some of whom were sitting in overflowing diapers and suffering from dehydration.

Public health authorities said the remaining residents will be transferred to other facilities over the next six to 12 months.

This report by The Canadian Press was first published Nov. 9, 2020.