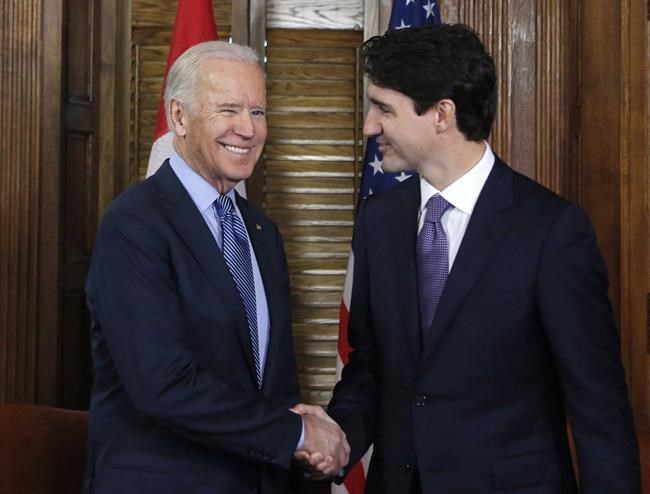 OTTAWA — The current president of the United States has warranted nary a mention from Prime Minister Justin Trudeau since Democrat Joe Biden became president-elect on Saturday.

While that might be setting Trudeau and Canada up for some retaliatory pain from Donald Trump, analysts are divided on how much misery even a very vindictive lame-duck president could inflict on his closest neighbour.

On Monday, Trudeau became the first international leader to speak to Biden, following his swift congratulations to the former American vice-president and his running mate Kamala Harris on Saturday.

The Prime Minister's Office released a statement congratulating Biden within 45 minutes of multiple news outlets having called the Democrat's pivotal victory in Pennsylvania.

Bessma Momani, an international affairs expert at the University of Waterloo, says Trump is likely keeping track of who is congratulating Biden.

She said there is no ruling out that Trump could find a way to retaliate against Canada in his remaining time in the Oval Office.

"Certainly, if one looks at why the Chinese have still held out on congratulating Trump, there is fear that Trump could be punitive on trade or other matters for those who are seen to side with Biden in the legal battle Trump has undertaken," aid Momani.

"One should not doubt that Trump is taking names and personalizing the congratulatory good wishes to Biden."

Trump has refused to concede defeat and is threatening legal action, claiming without evidence that he was cheated out of victory. His top diplomat, U.S. Secretary of State Mike Pompeo, told reporters Tuesday he expects a "smooth transition to a second Trump administration."

Trump imposed punitive tariffs on Canadian steel and aluminum in 2018 using a seldom-used section of U.S. trade law that gives the executive branch that power to protect national security.

The tariffs were ostensibly levied to block the flood of cheap Chinese steel into the U.S. through Canada. But Trump's commerce secretary said at the time they were being imposed because the Americans were unhappy with the slow pace of the renegotiation of the North American Free Trade Agreement.

Trump eventually removed the tariffs but reimposed a levy on Canadian aluminum in August, which was lifted less than a week before the presidential election.

"I don't have any suspicion that Mr. Trump is going to try to cause trouble from a trade point of view over the next couple of months," said Dennis Darby, the president of Canadian Manufacturers and Exporters.

Trump is likely not preoccupied with foreign opinions of him, and will turn his remaining days in office to making life miserable for his political opponents within the U.S., said Sarah Goldfeder, a former U.S. diplomat who is now an Ottawa-based consultant.

"I think Trump has two things on his mind and neither is Canada," said Goldfeder. Those are his political and financial survival "and making life hard for the Democrats and never-Trumpers."

She said "Trudeau did not reveal anything that Trump didn't already know" by calling Biden.

Trudeau and Biden released separate readouts of their conversation Monday, which summarized areas of potential co-operation as well as differences.

Biden's statement said he was looking forward to working closely with Trudeau on global health, revitalizing bilateral economic ties as well as the broader North American partnership, and working with Canada on a range of regional and global challenges.

Meredith Lilly, the Simon Reisman Chair in trade policy at Carleton University's Norman Paterson School of International Affairs, said Trump's bigger worries are all domestic and the Biden-Trudeau call likely hasn't even registered with him.

French President Emmanuel Macron has also now spoken with Biden, as will more world leaders in the coming days, "so we have some comfort in numbers," said Lilly.

"During the lame-duck period, it will be important for Canadian officials to maintain constructive working relations with the Trump administration, and I'm confident that Ambassador (Kirsten) Hillman and her team in Washington will do this with professionalism."

Fen Hampson, an international affairs expert at Norman Paterson who authored a book about Brian Mulroney's foreign policy, said it is not unusual for Canadian prime ministers to reach out to the winners of the U.S. presidential election before they have been formally sworn in, as Mulroney did with Bill Clinton.

"The calculus surely was that Trump is a now lame duck and already has done as much damage as he can to bilateral relations," said Hampson, adding that Trudeau likely wanted to "seize the day and not be too preoccupied with the downside risk."

This report by The Canadian Press was first published Nov. 10, 2020.