OPP officer and civilian dead after shooting on Manitoulin Island 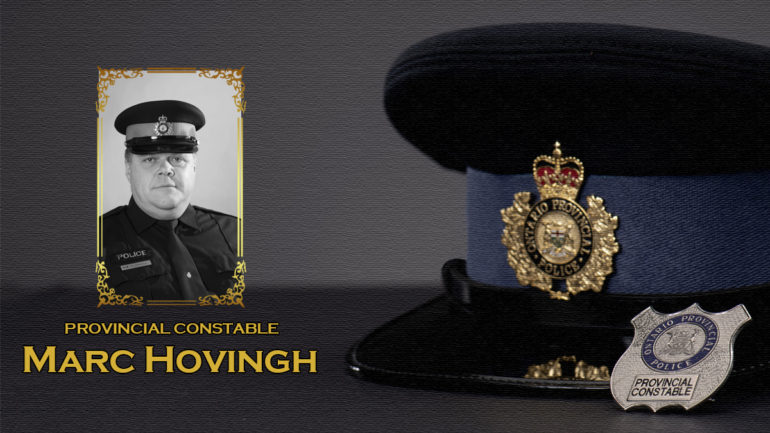 A long-time provincial police officer was killed Thursday in a shooting that also left a civilian dead in the tight-knit community of Manitoulin Island in Ontario's Georgian Bay.

The officer has been identified as Const. Marc Hovingh, who had been a member of the service for 28 years and worked out of the Little Current detachment.

The officer had been called to investigate an "unwanted man" on a property in Gore Bay, Ont., early Thursday afternoon, the province's police watchdog said.

The Special Investigations Unit said Hovingh was shot and killed after he arrived.

"Our hearts are with his family, friends and colleagues at this tragic time," OPP Commissioner Thomas Carrique said in a tweet.

The man on the property was also shot, and died after being taken to hospital, the SIU said.

There's no word on his identity.

Initial reports suggested a second officer was shot as well, but officials later said that's not the case.

The news quickly made its way through the small island community, said Dan Osborne, mayor of Gore Bay, one of several towns on the island.

He said he heard the sirens blaring early in the afternoon.

"We're a large island, but we are small in numbers," he said. "Everybody knows everyone, and it's pretty devastating."

Manitoulin, which is southwest of Sudbury, Ont., is the largest freshwater island in the world, and a popular vacation spot in the summer.

Michael Mantha, who represents Manitoulin Island in the provincial legislature, said OPP officers are an important part of the community.

"On Manitoulin Island, OPP officers are our friends and our neighbours. On duty and off, they play an active role in Manitoulin life," he said. "We will be forever changed by the devastating loss of one of our own."

Premier Doug Ford was also among those offering condolences for Hovingh in the hours after the incident.

"My thoughts are with all the brave men and women on the frontlines who put their lives on the line every day to keep our communities safe," he said in a written statement, adding that the flags outside Queens Park would be lowered in Hovingh's honour.

"The sorrow of an officer fallen will be felt province-wide," she said.