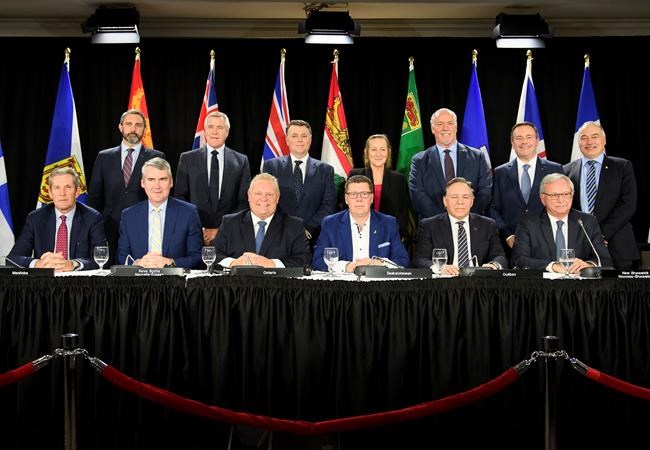 First ministers are scheduled to meet via conference call Thursday — a long-awaited session that was supposed to be devoted to the premiers' unanimous call for a big increase in the annual federal transfers for health care.

But the chair of the premiers' council, Quebec's François Legault, said Wednesday he doesn't expect one meeting will resolve the issue.

“Honestly, I think it will need more than a meeting to convince Mr. Trudeau to substantially increase the (Canada Health Transfer),” Legault said.

“We're asking for an increase of $28 billion a year, so we understand that it's a lot of money.”

New Brunswick Premier Blaine Higgs agreed it will take multiple meetings and said he hopes first ministers can at least agree to a schedule for them.

"I'm sure we'll have to have subsequent meetings on transfers because I doubt we'll come to any real agreement (Thursday)," he said.

"I would like us to keep a schedule, whether it's every two weeks or once a month. I think this is a priority that we have to get solved."

A spokeswoman for Doug Ford said the Ontario premier will ask during Thursday's meeting that first ministers set a deadline for resolving the issue in time for increased funding to be included in the spring federal budget.

"This is something the premiers have been advocating for several years now and it’s time to put a deadline on getting a clear answer from the federal government on addressing the funding shortfall," said Ivana Yelich.

"That’s why tomorrow Premier Ford will be calling for the federal government to give provinces an answer no later than the spring budget."

While the premiers want to talk solely about the annual health transfer, Trudeau has been clear he also wants to talk about the rollout of COVID-19 vaccines and the provinces' immediate needs to combat the pandemic.

Yelich said Ford welcomes the opportunity to discuss vaccines. But she argued there are other "official channels through which those discussions" are already happening and urged that Thursday's focus be on the health transfer.

"There is only one place where a conversation about a new agreement on stable, long-term health care funding can take place and that’s at the table with the prime minister."

The federal government this year will transfer to the provinces nearly $42 billion for health care, under an arrangement that sees the transfer increase by at least three per cent each year.

But the premiers contend that amounts to only 22 per cent of the actual cost of delivering health care and doesn’t keep pace with yearly cost increases of about six per cent.

They want Ottawa to increase its share of health spending to 35 per cent and maintain it at that level, which would mean an added $28 billion this year, rising by roughly another $4 billion in each subsequent year.

On top of the annual transfer this year, the federal government has given the provinces an extra $19 billion to help them cope with the fallout from the COVID-19 pandemic, including more than $10 billion specifically for pandemic-related health-care costs.

Finance Minister Chrystia Freeland promised $1 billion more for long-term care homes, which have been hardest hit by the pandemic, in her fiscal update last month.

But the premiers say all that extra money is one-off; what they need is an increase in annual transfers to ensure stable, long-term funding.

Questioned about the premiers' demand for a big hike in the health transfer, Trudeau repeatedly highlighted Wednesday the unprecedented amounts of money his government has given provinces and territories to cope with the pandemic.

"We have been there with historic transfers of tens of billions of dollars," he told the House of Commons.

"We've been there for the protective gear, for the rapid testing, and now we're here to help with the vaccines. I look forward to sitting down with the premiers tomorrow to talk about all that we are doing together to protect Canadians now and to see how we can work together for years to come as well."

While the premiers are unanimous in wanting more annual funding for health care, they are not unanimous about whether strings should be attached to it.

Legault, for one, is strenuously opposed to any conditions being put on how provinces spend the transfer payments. But Nova Scotia's Stephen McNeil said Wednesday he'd have no problem with that.

"They can target all of that funding to specific aspects if they want, whether it is mental health, wait times … We just need them to increase the level of funding," McNeil said.

This report by The Canadian Press was first published Dec. 9, 2020.

—With files from Shawn Jeffords in Toronto, Keith Doucette in Halifax, Kevin Bissett in Fredericton and Jacob Serebrin in Montreal