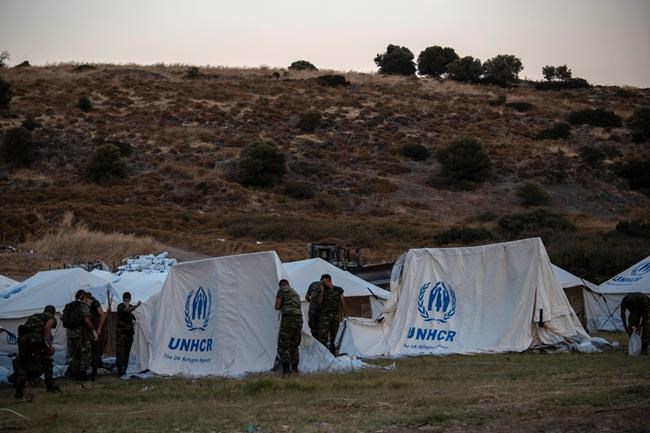 OTTAWA — The year 2020 will go down as the worst for refugee resettlement in recent history, says the UN refugee agency's Canadian representative.

With nearly 168 countries implementing border and travel restrictions, millions of displaced people around the globe were stuck, unable to either return to their home countries or move to others.

Canada, however, was one of only a few that did listen to urgent pleas from the United Nations High Commissioner for Refugees, said Rema Jamous Imseis, the UNHCR's Canadian representative.

Even at the height of the pandemic, when most countries were looking entirely inward, Canada did accept emergency cases and as travel has resumed continues to take in more, she told The Canadian Press in an interview.

"It hasn't, unfortunately, been at the levels that we had planned for prior to the pandemic, but it still is offering that critical lifeline to people who desperately need it," she said.

"And we hope that next year actually is going to bring us a very different context and an ability not only to meet those targets, but to perhaps even exceed them."

By the end of September, just under 6,000 had arrived, and a spokesman for Immigration Minister Marco Mendicino said the end-of-year figure will be closer to 7,000.

The target for resettlement next year is 35,000, but how realistic that goal is considering the unknowns around the end of the pandemic is unclear.

Mendicino's spokesman said in an email that the entire resettlement "ecosystem" continues to operate at a reduced capacity, but is slowly spooling back up.

"While our operations have been affected, we’ve come a long way since the onset of the pandemic and are now processing nearly six times as many refugee cases as in a similar period last year," Alexander Cohen said in an email.

The border closures weren't the only challenge this year for refugees, said Jamous Imseis.

Many of the world's displaced people were just scraping by economically before the pandemic hit, but their sources of income completely dried up, she said.

"The ability to sustain themselves and their families has been wiped out," she said.

"So you saw entire populations going from vulnerable, but with the ability to sustain themselves overnight to becoming really vulnerable."

There's also been a massive blow to the ability of children to be in school. A pivot to online learning possible in some developed nations just isn't applicable elsewhere, she said.

Some studies suggest more than half of refugee girls may never go back to post-secondary education after the pandemic, she said.

"They haven't been at school this whole time, and they may never go back because life circumstances have changed so dramatically," she said.

Monday is the UNHCR's 70th anniversary. It was created to help displaced Europeans after the Second World War and originally was only supposed to exist for a few years.

"But sadly, we're still here and it signals the failure of the international community to really address long-standing issues, and drivers of displacement globally," said Jamous Imseis.

"We look forward to the day when our services are no longer needed."

This report by The Canadian Press was first published Dec. 14, 2020.