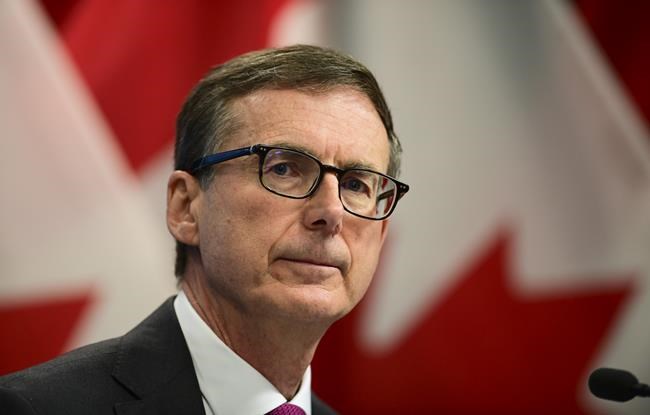 OTTAWA — Canadian governments must be ready to fight a potential brain drain south of the border in the face of a new U.S. administration, Bank of Canada governor Tiff Macklem said Tuesday.

But the advantage for international students and workers is likely to disappear as Trump exits the White House next month, Macklem said in a speech to the Greater Vancouver Board of Trade

He says being welcoming to newcomers can help boost the economy and increase exports in goods and services needed for a recovery from the COVID-19 pandemic and that Canadian schools and companies may have to fight harder to attract and retain talent after Joe Biden is sworn in as president.

But Macklem warns that fighting for talent isn't enough on its own to create a sustainable recovery, noting that governments must also invest in infrastructure and remove internal trade barriers to help exports recover.

He says federal and provincial governments have co-operated often through the pandemic, suggesting it could finally lead to an end on inter-provincial trade hurdles that stymy the movement of goods, services and professionals.

Macklem notes he met last month with leaders from several logistics companies who shared their concerns about bottlenecks, particularly at ports.

The recovery so far has seen the country recoup just over 80 per cent of the three million jobs lost during spring shutdowns and output is climbing closer to pre-pandemic levels.

Macklem says much of that rebound is being fueled by household spending, but the country will need to see a rise in exports and business investment if the recovery is to be sustainable.

The path exports take will rest on global forces, Macklem says, including whether international co-operation on vaccines and distribution break through protectionist policies.

"Obviously, we all hope that real life turns out closer to the optimistic scenario than the pessimistic. But hope is not a strategy," reads the text of Macklem's speech.

"We need to think strategically to increase the odds of a strong trade recovery."

The last time Canada climbed out of a recession following the 2008-2009 global financial crisis, Macklem was the second-in-command at the central bank.

Even though Canada's recession was neither as long nor as deep as other countries, domestic exports took a sharper dive. As Macklem noted in his speech, global exports fell less than 20 per cent at the time, while Canadian exports dropped by close to 30 per cent.

The reason was a combination of weak foreign demand, particularly from our biggest trading partner in the United States, Canada's reliance on the U.S. and other slow-growth markets instead of emerging economies largely, and a lack of competitiveness.

But while the period before that crisis was relatively positive for trade, Macklem says the same can't be said this time around, pointing to trade disputes started by Trump.

As well, Canada's trade in services, such as tourism, haven't recovered as well as goods such as automobiles, even though service exports had been growing faster than goods.

What's needed is for companies to think about what products are in demand in fast-growing markets, Macklem says. He pointed in his speech to digital services like online education and e-commerce, or applying new technology to traditional sectors.

He also says the export potential for green technology is high given global concerns about climate change.

This report by The Canadian Press was first published Dec. 15, 2020.